1. We predict a slump in Holiday spending, though not the crash people feared back when the pandemic started. 46% of people plan to spend the same amount this holiday season, while 33% plan to spend less and 20% plan to spend more.
2. Gen Z seems to be the most confident in their spending this year, with 32% of people under 24 indicating they plan to spend more, compared with 20% of people aged 25-34, 13% of people 35-44, and 9% of people aged 45 and above.
3. Canadians are planning for more conservative holiday spending, with 39% of Canadians planning to spend less this year compared to only 31% of Americans.
4. Subtle differences in spending patterns emerge at the city-level. 47% of Torontonians are planning to do most of their spending on Black Friday, compared to only 40% of New Yorkers and 38% Angelenos. 33% of Angelenos and 31% of New Yorkers planning to do the majority of their spending on Cyber Monday compared with only 20% of Torontonians.
5. Electronics was voted as the most “Hot” holiday spending category. Travel was voted the most “Not Hot,” which is unsurprising given the pandemic.

To better understand everyone’s plans for holiday spending, Cardify surveyed over 7,000 people across North America. In this report, we’re diving into the key categories to watch and offering our official forecast on 2020 holiday spending.

Prepare for a soft shopping season

We’re anticipating a net decrease in overall spending and a soft holiday season this year. The largest group of people are keeping things consistent, with 46% planning to spend the same amount this year as they did last year. While 20% say they plan to spend more or a lot more, that likely won’t make up for the 33% planning to spend less or a lot less this year.

We also asked consumers both what they planned to spend in each category this year compared to last year and which categories they believe will be “Hot” and “Not Hot” in holiday spending this year. 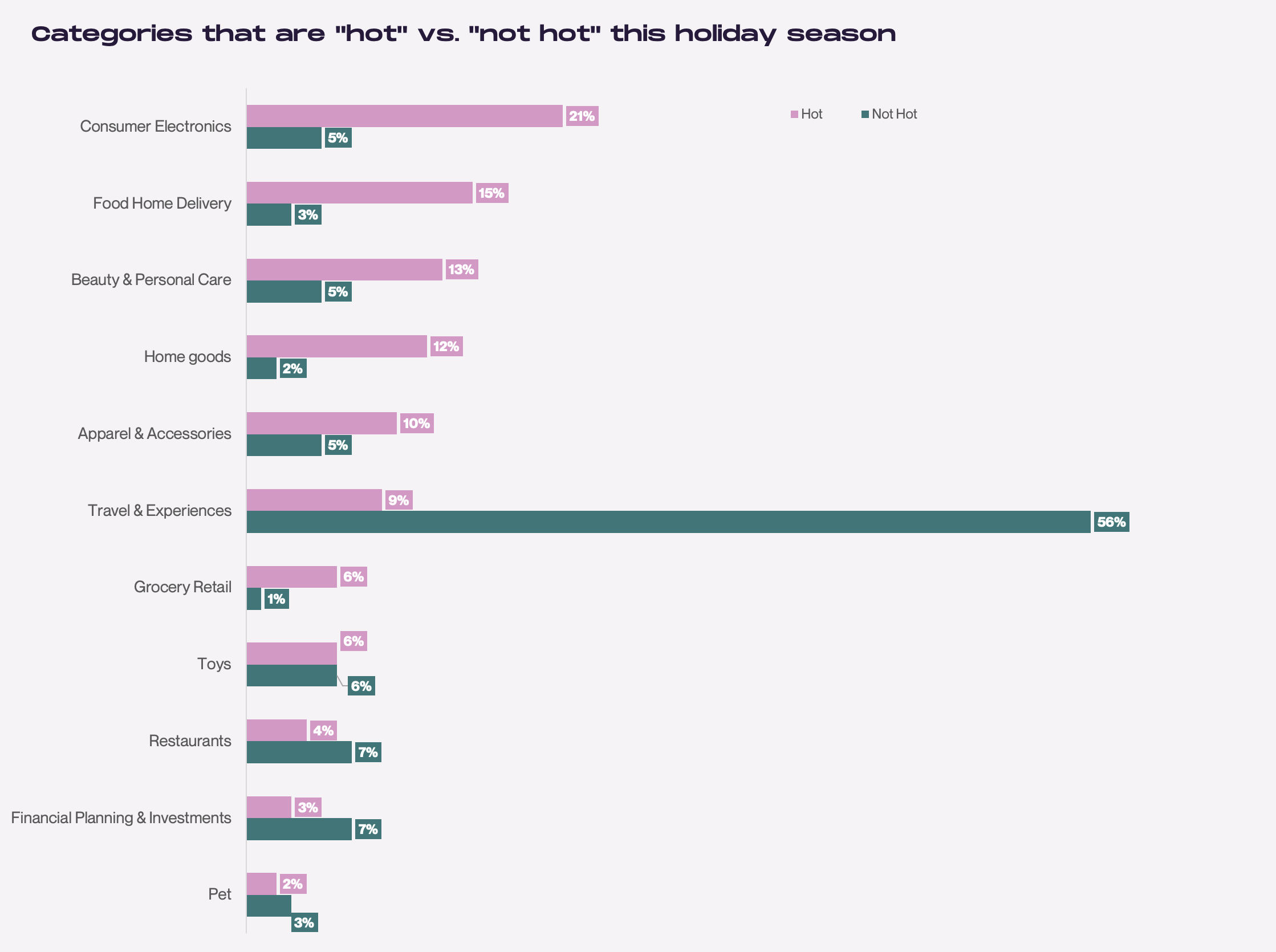 Perhaps unsurprisingly, non-essential categories like Travel, Toys, and Electronics are at the highest risk of a sales decline. What’s interesting, though, is despite 36% of people planning to spend less on Electronics, respondents ranked Electronics as the “Hot” category for this holiday season, followed by Home Food Delivery. When it comes to what’s “Not Hot” this holiday season, the vast majority of people said Travel.
‍
Home Goods, Apparel, and Beauty appear to be trending up this holiday season. These are the top three categories people say they will spend more on this year, though the percentage of people planning to spend more is still a minority at 26%, 25%, and 21%, respectively.

Gen Z vs. Everybody 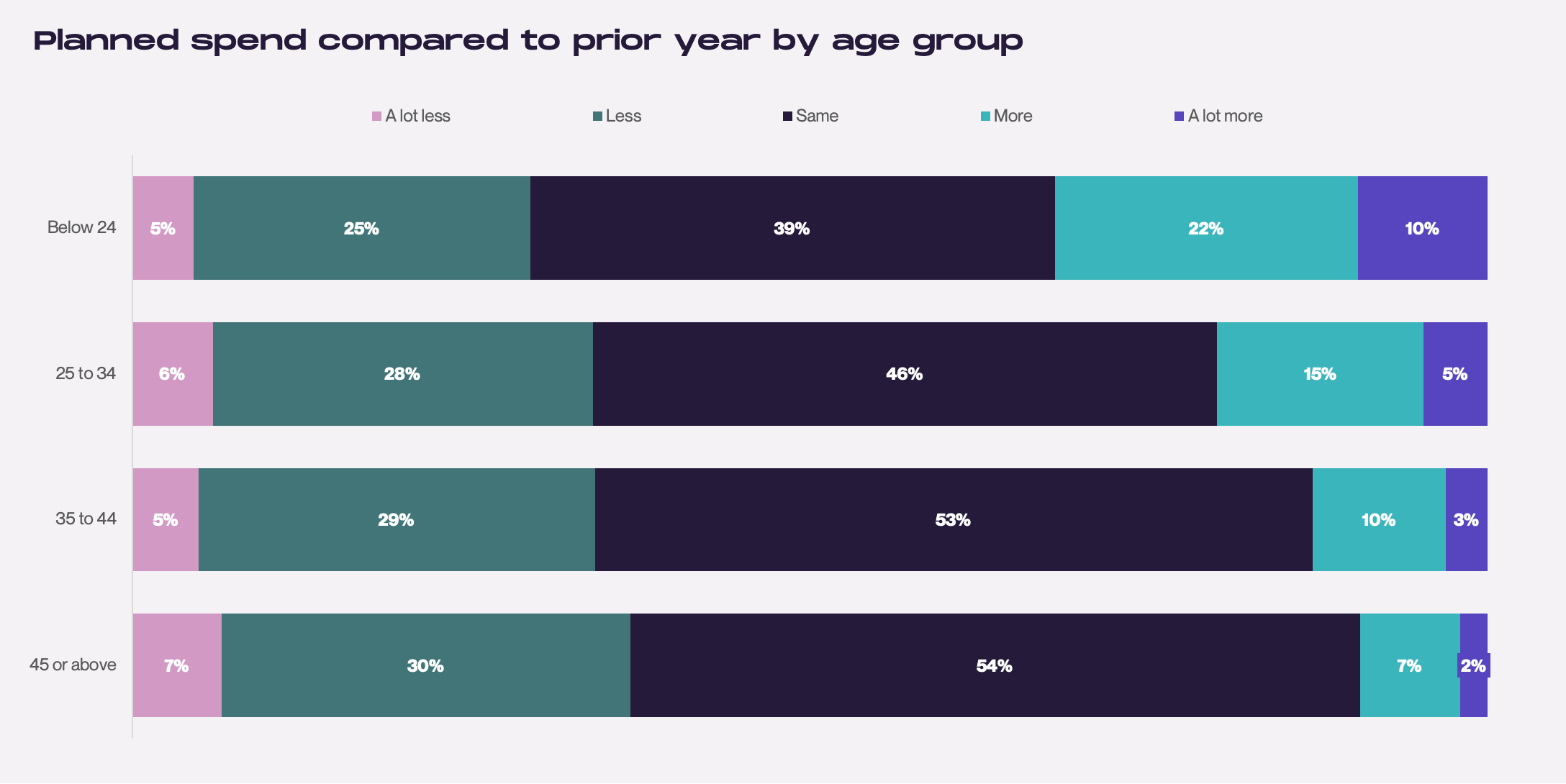 Gen-Z is also disproportionately willing to spend more on Beauty and Apparel, signalling that brands in these spaces like Old Navy, Nike, Sephora, and Lululemon could see a holiday bump. The caveat is that Gen-Z typically has less disposable income than older generations, so brands should still be cognizant of how their marketing efforts play into different age categories. This applies particularly for brands like TJ Maxx that sell Home Goods, which many people 20-35 report planning to spend more on, and Pets, which more than 50% of every age group plans to spend the same or more on this year.

The biggest spending discrepancy seems to be on Travel, with 76% of Canadians planning to spend less this year while only 60% of Americans have the same plan. This could be due to pandemic restriction differences between the two countries or the fact that domestic travel in Canada is typically more expensive than domestic US travel.

On a city level, New York, Los Angeles, and Toronto had some noteworthy differences between them. 47% of Torontonians are planning to do most of their spending on Black Friday, while only 40% of New Yorkers and 38% Angelenos plan to do the same. Cyber Monday seems to be bigger in the US, with 33% of Angelenos and 31% of New Yorkers planning to do the majority of their spending on Cyber Monday compared with only 20% of Torontonians.

The cities also differ in terms of which categories people are planning to spend the most on:

Residents of all three cities largely agreed on “Not Hot” categories, with Travel vastly leading the pack. Following their respective country’s trend, Americans tended to vote Financial Planning as “Not Hot” more frequently than Canadians - 10% of Angelenos and 4% of New Yorkers versus only 1% of Torontonians.

Brace for a different holiday

Black Friday, Cyber Monday, and the holiday shopping season is often when brands can count on making most of their revenues. Unfortunately, this year will not be the same stalwart reality brands have come to expect. One thing is for sure, though: more money will be spent online as people can’t go, or don’t feel comfortable going, into stores and malls for traditional Black Friday door crashers and other holiday shopping.