1. Consumers are spending less on their credit cards and carrying smaller balances as a result.
2. As a percentage, consumers are paying a smaller chunk of their monthly credit card balance. Prior to the pandemic, the average customer in our panel was paying 27% of their balance each month. Post-pandemic, that figure stands at 24%.
3. Men, and younger demographics tend to pay off a larger chunk of their balance, both before and after the coronavirus hit our shores.

Last week, we wrote about how consumer income had plummeted, with over 60% of Americans experiencing a decline in income as a result of job losses or salary reductions. Today, we're shifting our focus to credit card debt, and looking at how that's changed for our panel.

Note: Given that we don't have a view on when each consumer's monthly invoice is generated, we approximate their monthly statement balance to be the highest balance for a given month, net of refunds.

Going into this, we expected to see statement balances grow, and monthly payments to decline. However, at first glance, this was not the case. The majority of consumers saw their balances decrease, and over a third of them increased their monthly payments. While this initially took us by surprise, we quickly realized that the decrease in monthly balances was largely attributed to a decline in credit card spending. Since the start of the pandemic, there has been a major shift in spending to debit, decreasing credit card balances as a result.

As for the third of consumers making larger payments, their payments increased by $788 whereas  54% of the population made payments that were ~$1100 less than prior to the pandemic.

To get a clearer picture of what's going on, we decided to segment the panel based on the same income brackets used in the first part of this story. The results paint a clearer picture. While card balances have declined roughly 8-12%, balance payments have declined by nearly double as much across every income bracket. As expected, the delta is largest among those that recently lost their jobs or experienced a decrease in wages.

For a different perspective, let's look at a single metric, percentage of outstanding balance paid, and see how that's shifted during the pandemic. In doing so, we observe that across the board, people are paying off less of their card debt. The decline looks relatively even when we segment by income brackets. However, when we look at the numbers based on recent changes to income, we see some stark contrasts. Among the population, those who did not experience any loss in income were largely paying off the same share of their credit card balance each month (1.7% decline). However, those who experienced a decline in income decreased their payments by 3.6% (in comparison to their monthly balance). And consumers that lost their entire income (loss of job) decreased their payments by 4.3%.

This metric doesn't fluctuate much when we slice it by gender. Though interestingly, we can see that men paid a larger share of their balance both before and after COVID-19.

Note: Due to the size and makeup of our panel, we avoid breaking out "Other" genders.

Broken down by age, we see similar results as consumers decrease their payments across the board. Interestingly, younger consumers tend to pay off a larger chunk of their credit card debt (both before and after COVID-19) in comparison to their older counterparts. This could be sign of increasing financial awareness and maturity within younger demographics.

Now, while there were regional variances in how credit card balances and payments shifted, they were largely proportional to the loss of income experienced within the state. As a result, we don't believe there to be any regional behaviours worth noting. 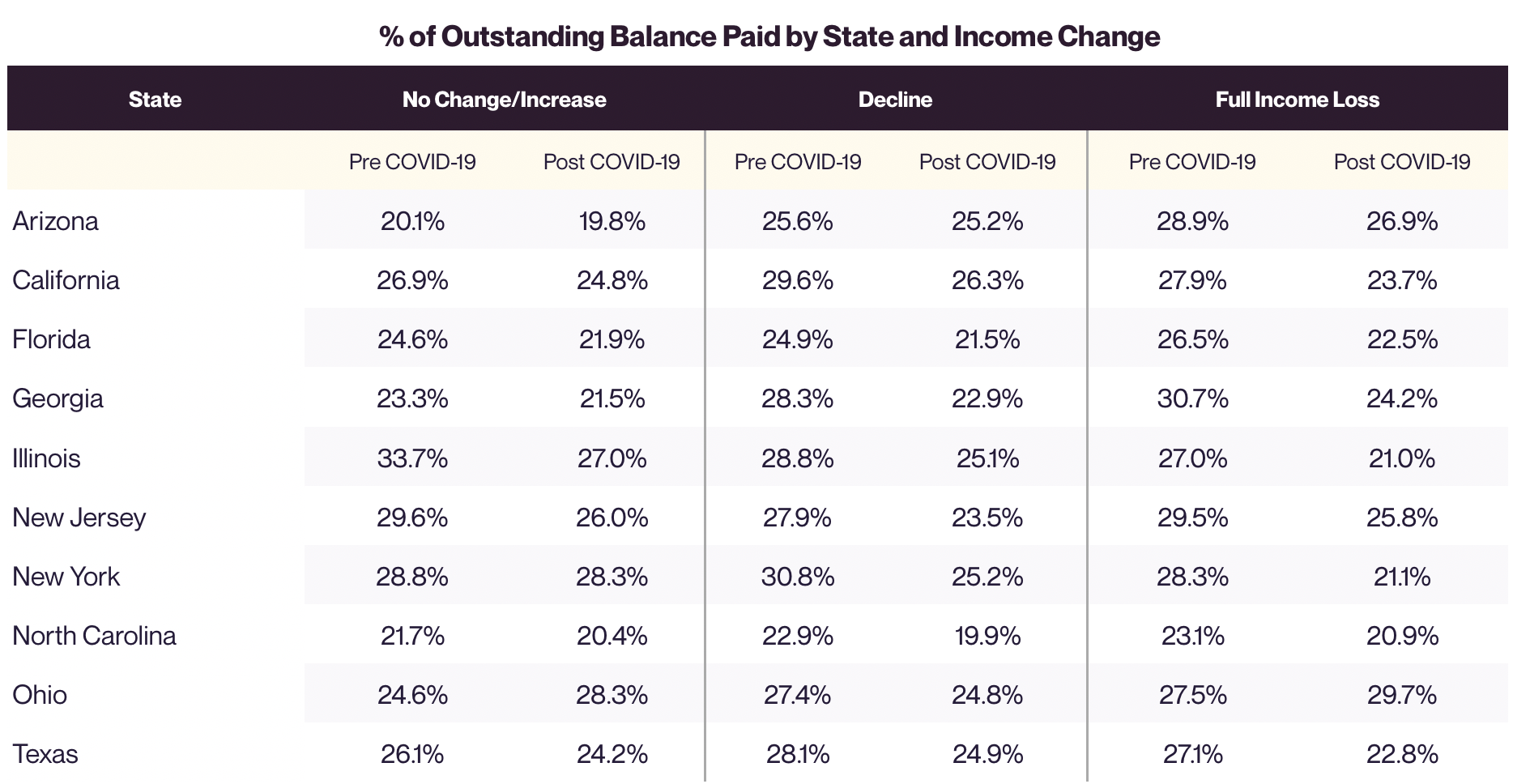 Overall, what we see is a clear trend. Consumers are using their credit cards less than before, but they've also begun to pay less of their outstanding balances as economic pressures mount. Tune in next week as we cap off this series by looking at how these various segments of the population changed their spending to adjust to these new economic realities.