Entertainment Spending During the Fourth Wave

1. Entertainment spending overall has recovered to pre-pandemic levels as of July 2021.
2. Unvaccinated consumers have increased their entertainment spend at 3 times the rate of vaccinated consumers. However, those who are unvaccinated only account for 23% of the population.
3. Movie theatres are the most popular outing for people who participated in live entertainment during the pandemic. This continues to hold in a post pandemic world with the largest (60%) proportion of respondents indicating that they will participate in the next 3 months.
4. Entertainment spending is likely to slow during the fourth wave as the majority of survey respondents indicate that they will be reducing their participation, even if they aren’t very concerned with health risk.

As the COVID-19 pandemic enters its fourth wave globally, the entertainment industry is watching closely. To better understand how the recent rise in case count is impacting consumption of live entertainment - movie theatres, theme parks, concerts, and sporting events - Cardify looked at first-party spending data from 82,000 members throughout 2020 and 2021. Further, Cardify surveyed 1,593 of its US users to understand their spending intent for different entertainment experiences, segmenting the survey data based on vaccination status and level of concern with the current state of the pandemic.

Total entertainment spend has functionally recovered to January 2020 levels as of July 2021. While entertainment saw a nearly 80% sustained drop in spending throughout 2020 and into early 2021, as vaccination ramped up in March 2021 so too did spending.

Drilling down by category, Theme Parks have seen a massive surge, reaching approximately 250% of its pre-pandemic levels in June 2021. Movie theatres and concerts & sporting events saw a bump in spending, but both still sit below pre-pandemic levels.

Given the strong recovery to date, Cardify wanted to understand what the next few months will hold for the entertainment industry and surveyed registered users on their spending intentions.

Spending during the pandemic

According to survey results, 58% of respondents halted all entertainment activities during the height of the pandemic. Of those who went out, movie theatres were the most popular activity, with 25% of respondents saying they went to a movie. Theme parks were the next most popular option (17%) followed by sporting events (15%). 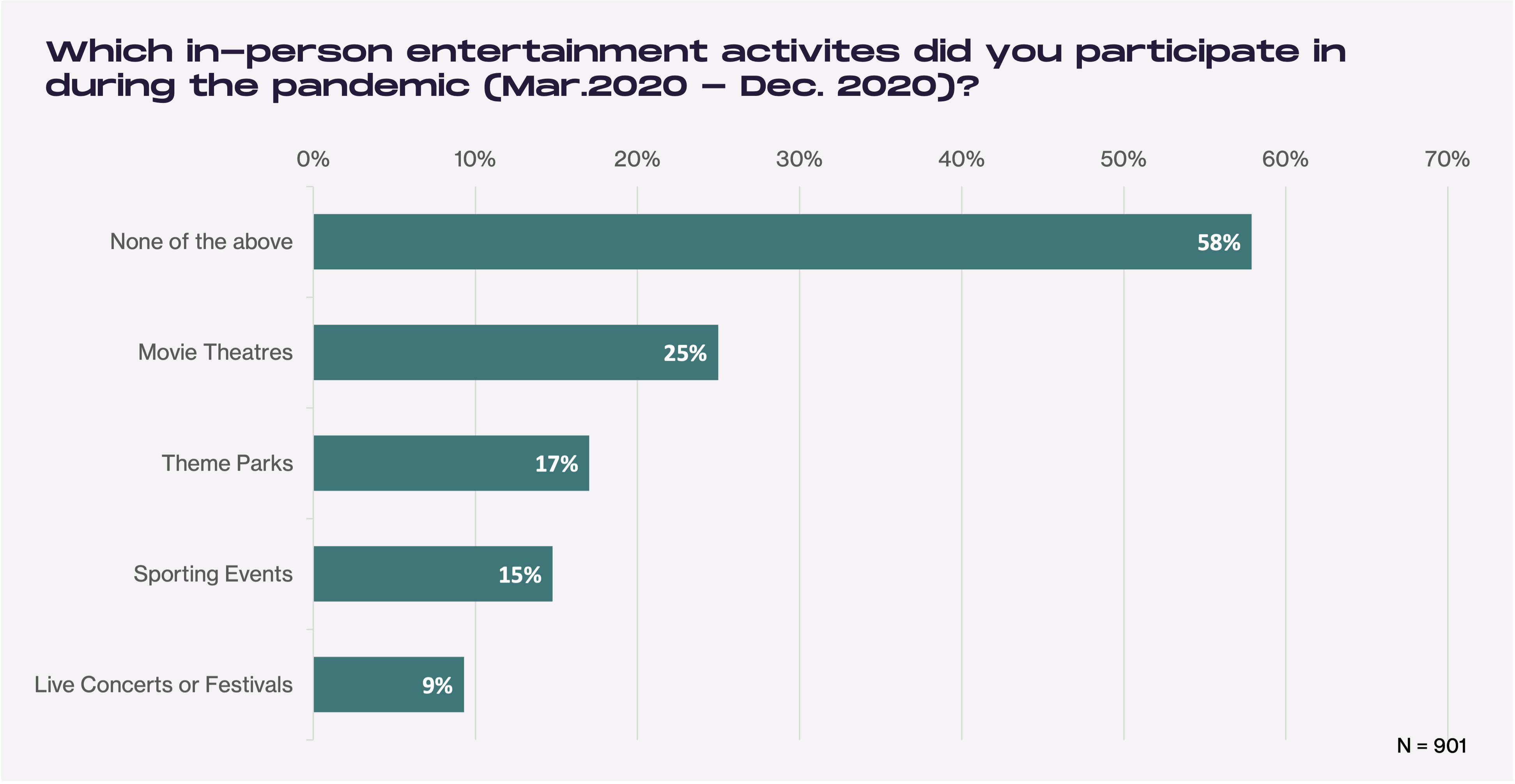 When asked why they did not participate in live entertainment during the pandemic, the most common answer was that lockdowns made entertainment options unavailable (54%). A very close second (53%) cited health risks as their motivation. Only 21% reported that they substituted virtual alternatives for in-person entertainment events.

For the US, the pandemic started to lift in January 2021. Although severe third waves continued to ravage parts of the world, vaccination efforts in the US were beginning to ramp up. Cardify surveyed users to understand if optimism around vaccines encouraged consumers to return to in-person entertainment events. 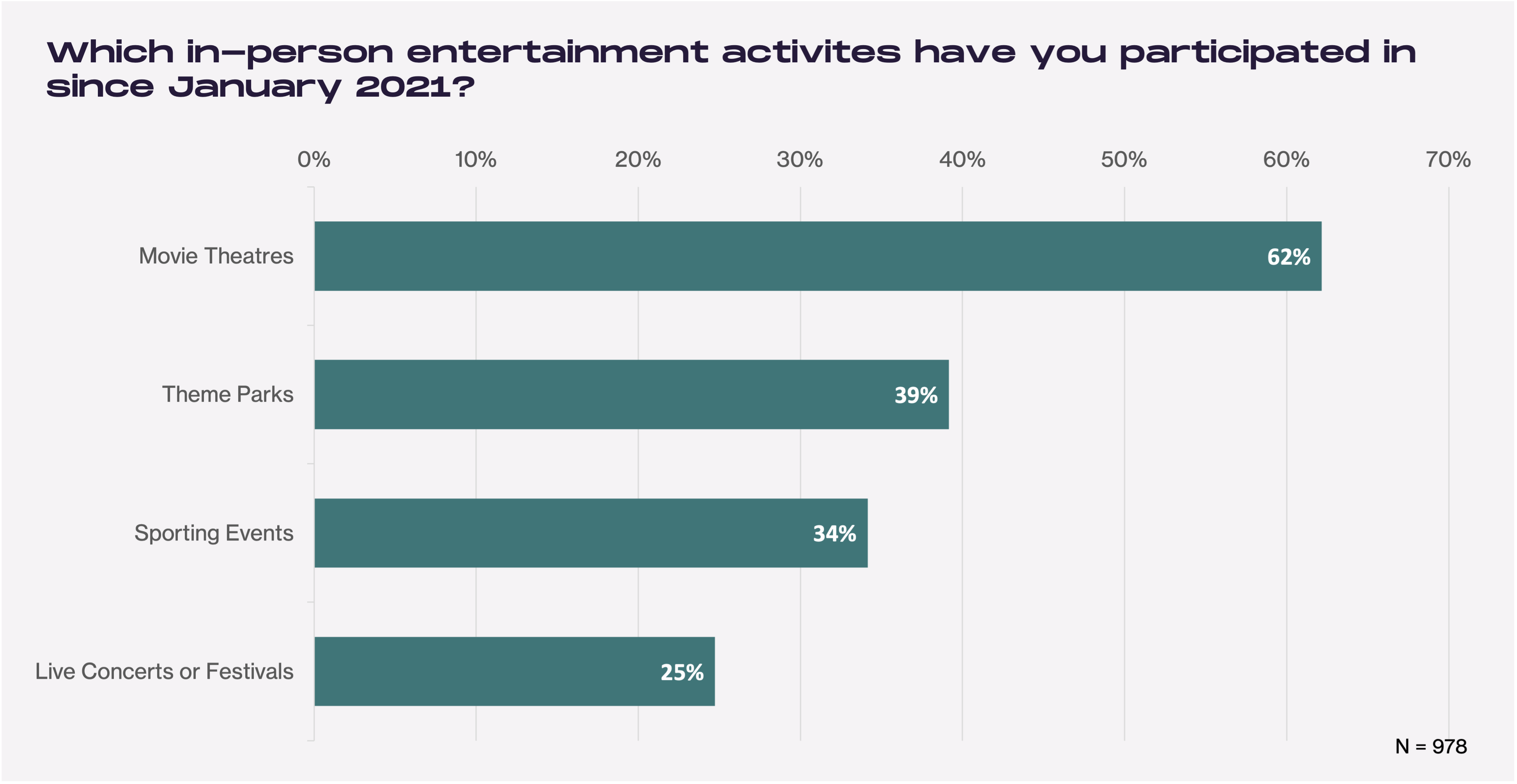 Spending intentions for August to October 2021 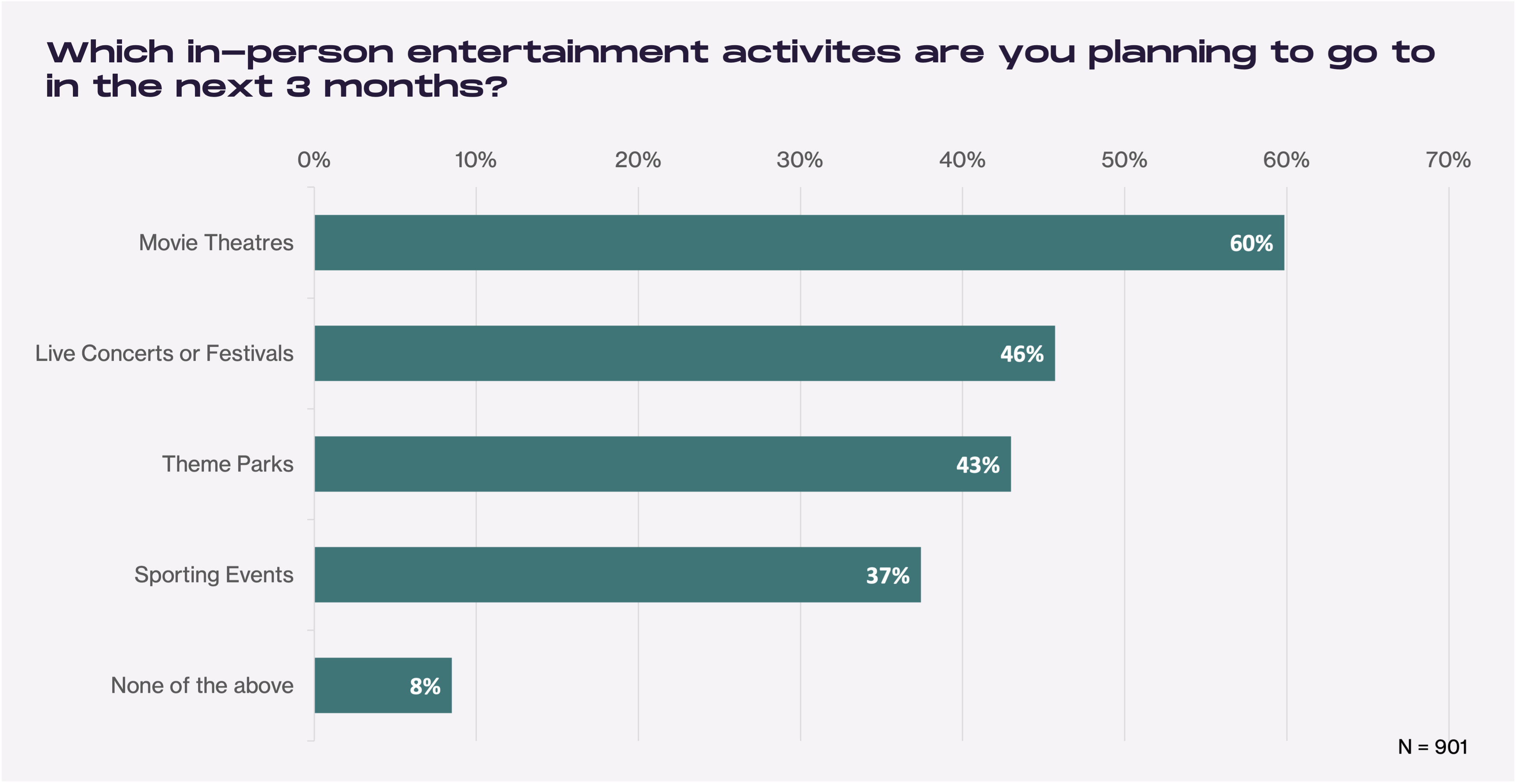 To account for potential impacts of the recent rise in case counts, Cardify polled its users about their level of awareness and concern with the fourth wave. Nearly all (92%) of respondents are aware of a looming fourth wave of COVID, but concern levels are mixed. While 29% report they are more concerned, 36% report the same level of concern and 35% report being less concerned.

There is also a slight correlation between a consumer’s level of concern with the fourth wave and their intent to participate in live entertainment over the next three months. The majority (88%) of those who are more concerned about the recent surge in cases compared to previous peaks said they will go out less in the next three months. Of those with the same level of concern, 65% say they will go out less due to the fourth wave. A smaller majority (61%) of people who are less concerned also reported that they will scale back their participation.

A mixed bag for entertainment

Entertainment spending has finally recovered to pre-pandemic levels as of July 2021. Unvaccinated individuals over-index in their contribution to this recovery, increasing their category spend at three times the pace of vaccinated individuals. While consumers know exactly which activities they’d like to return to - Movie Theatres are at the top of the collective bucket list - there is still concern with the looming fourth wave. Consumer intent to participate is dampening, and all eyes will be on the sector given the rising threat of the Delta variant.