How has the pandemic changed the food delivery landscape?

For over a year now, the food delivery wars have been heating up as consumer engagement gains traction, new entrants join the fight, and all players struggle to balance the need to grow with the increasing demand to show a viable path to profitability.
‍
As COVID-19 sweeps through the US, more than 75% of the population finds itself living under some form of self-isolation. With restaurants increasingly unable to service customers in person and consumers itching to try new things at home, many have predicted that we’re on the cusp of explosive growth within the sector.
‍
While it may be too early to understand the long term impact of the current crisis on consumer behaviours, early signs indicate that over the last two weeks Americans have substantially increased their spending with the major food delivery providers.

This increase has been driven by a number of factors. For starters, consumers are using food delivery apps more often than before. With the exception of Uber Eats, every major delivery provider is experiencing all-time highs in terms of frequency of purchase.

Average order value has also risen sharply over the last couple of weeks. This phenomenon is likely influenced by a multitude of factors, namely an influx of new restaurants (including higher priced restaurants traditionally only available for in-person dining), larger group orders for the home, and the fact that most delivery providers have been adding grocery to their arsenal.

Finally, new customer acquisition has also increased rapidly for all providers.  With fewer consumers willing or permitted to leave the house, we’re seeing an influx in first time users across all four platforms.

Did you notice DoorDash standing out in comparison to the others?

So did we. In fact, we noticed that DoorDash has been increasing its marketshare over the last few months, well before the pandemic reached the United States.

Note: Due to difficulties in distinguishing Uber and Uber Eats transactions (many banks display both as “Uber”), marketshare for Uber Eats is underestimated. Based on Uber’s public filing, they are the largest food delivery provider in the US.

While order frequency had been relatively flat for DoorDash throughout 2019, it began to rise noticeably as of the start of 2020.  The company's monthly delivery subscription "DashPass", the McDonald's partnership (previously exclusive to Uber Eats), and the addition of a multitude of other high-frequency restaurants are the most likely contributing factors.

In addition to this, DoorDash's partnership with Chase seems to have been very successful for the company. In January, the two companies announced that they'd be offering free DashPass benefits to Chase Sapphire cardholders. The card, which is wildly popular among younger demographics across the US, seems to have given DoorDash a substantial revenue boost.

What’s interesting is how quickly the shift occurred. Notable increases in DoorDash orders begin to happen within weeks of the Chase announcement. This supports the common belief that food delivery is a highly price-sensitive market, with consumers quickly shifting to the provider offering the lowest cost.

The added fact that most consumers are already using multiple food delivery apps, makes it that much easier for these major shifts to occur quickly. 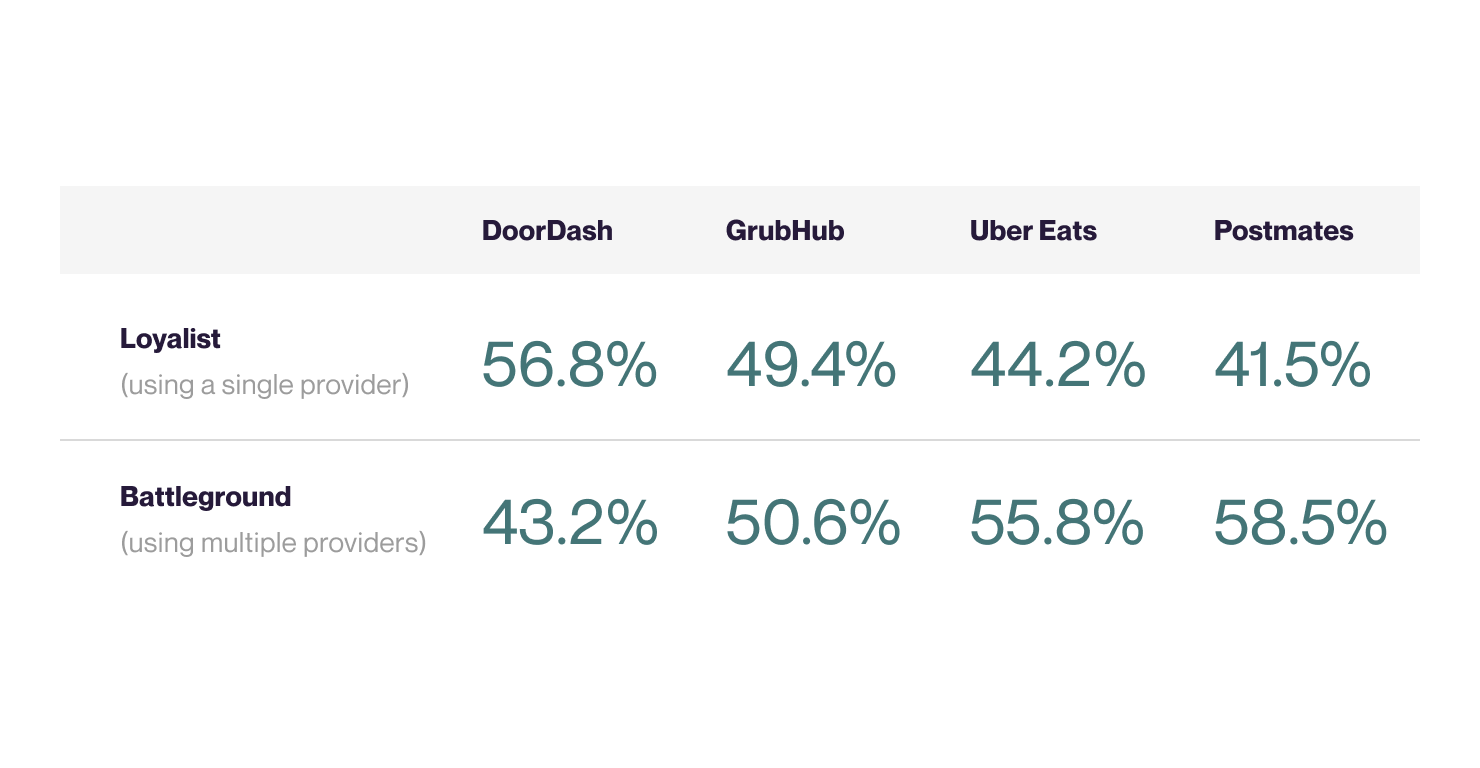