1. Early on in the pandemic, Cardify data shows Home Depot began to lose market share to its top US competitor - but, in the months that followed, Home Depot clawed its advantage back
2. Today, customers are spending more at Home Depot per visit ($98) compared to Lowe’s ($86)
3. Loyalty is key for brands and with more than 50% of customers identifying Home Depot as their store of choice, the retailer continues to maintain an advantage over Lowe’s
4. 44% of consumers say they are putting projects on hold due to rising materials costs

During the pandemic, people flocked to top hardware and home improvement stores to execute major projects that add value to their homes and spruce up their garden. And, it showed in the spending data - for both Home Depot and Lowe’s, trends reflect rising spend during the pandemic as consumers changed behaviors, which benefited each retailer. Ahead of their respective earnings calls, Cardify analyzed first-person spending data for Lowe’s and Home Depot, tracking overall spending, transaction volume, average spend per transaction, and overall market share. From there, we surveyed more than 900 members of our home improvement micro-panel to better understand their store preferences and impact the rising cost of lumber had on DIY renovation plans.
‍
Lowe’s saw a faster rise and higher peak in consumer spending during the early days of the pandemic, but also experienced a sharper fall as spending cooled off in the summer and fall of 2020. By contrast, Home Depot had a relatively smaller peak (approximately 2.2x to Lowe’s 3x), but it has since maintained spending levels above pre-pandemic 2020 levels. 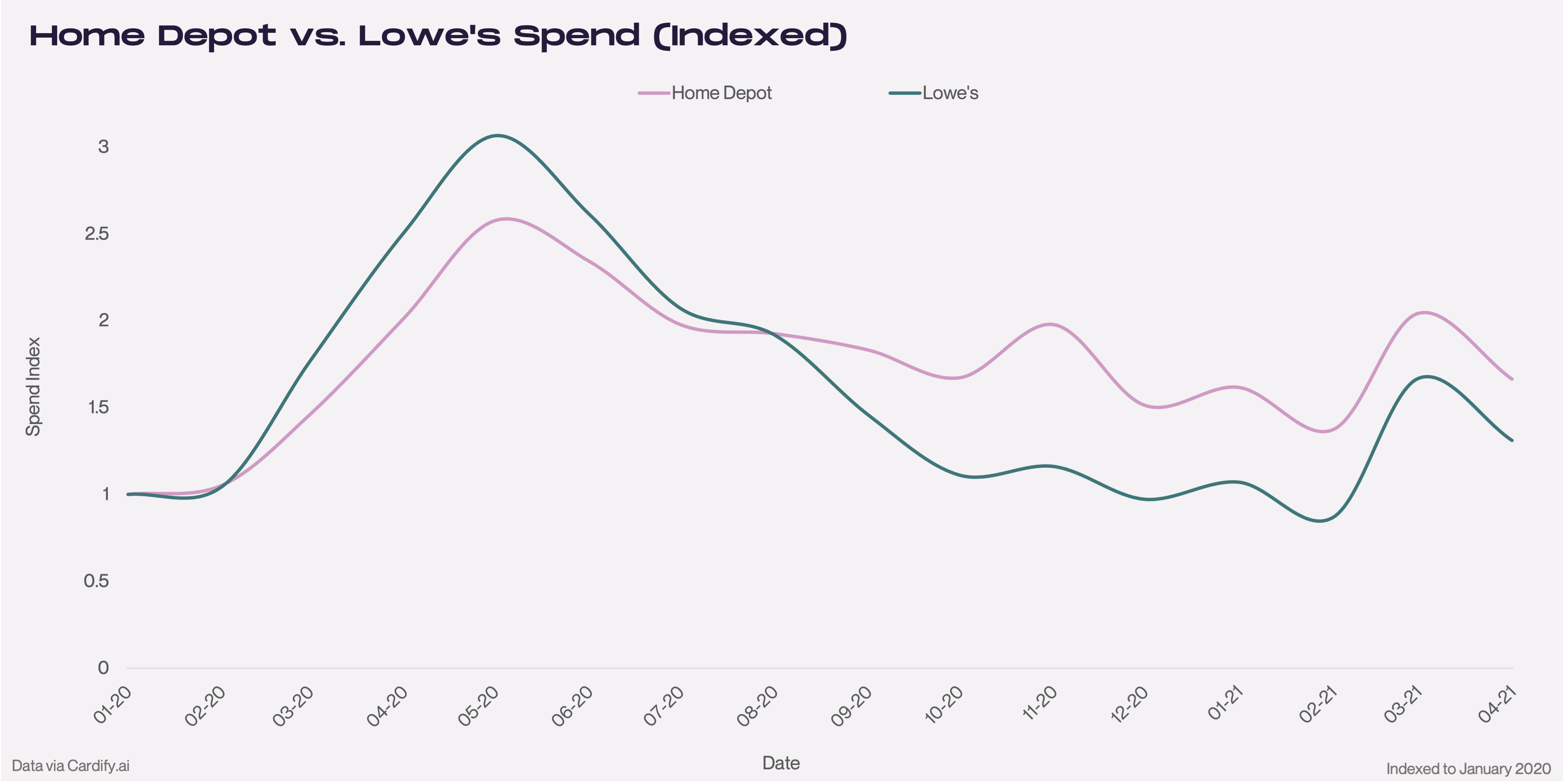 “Both Home Depot and Lowe’s saw massive gains during the pandemic,” said Derrick Fung, CEO of Cardify. “Our data uncovered that while Lowe’s surged during the early days of the DIY trend, Home Depot has ultimately won out in sustained growth. Perhaps they have their loyal, high-value customers to thank.”

The number of transactions at each retailer followed the same pattern as overall spending. Lowe’s saw a sharper increase in the early days of the pandemic - jumping to 2.5x its January 2020 levels - but it soon dropped below pre-pandemic volumes. Home Depot jumped only to 2x its January 2020 level, but has stayed above pre-pandemic volumes since then. 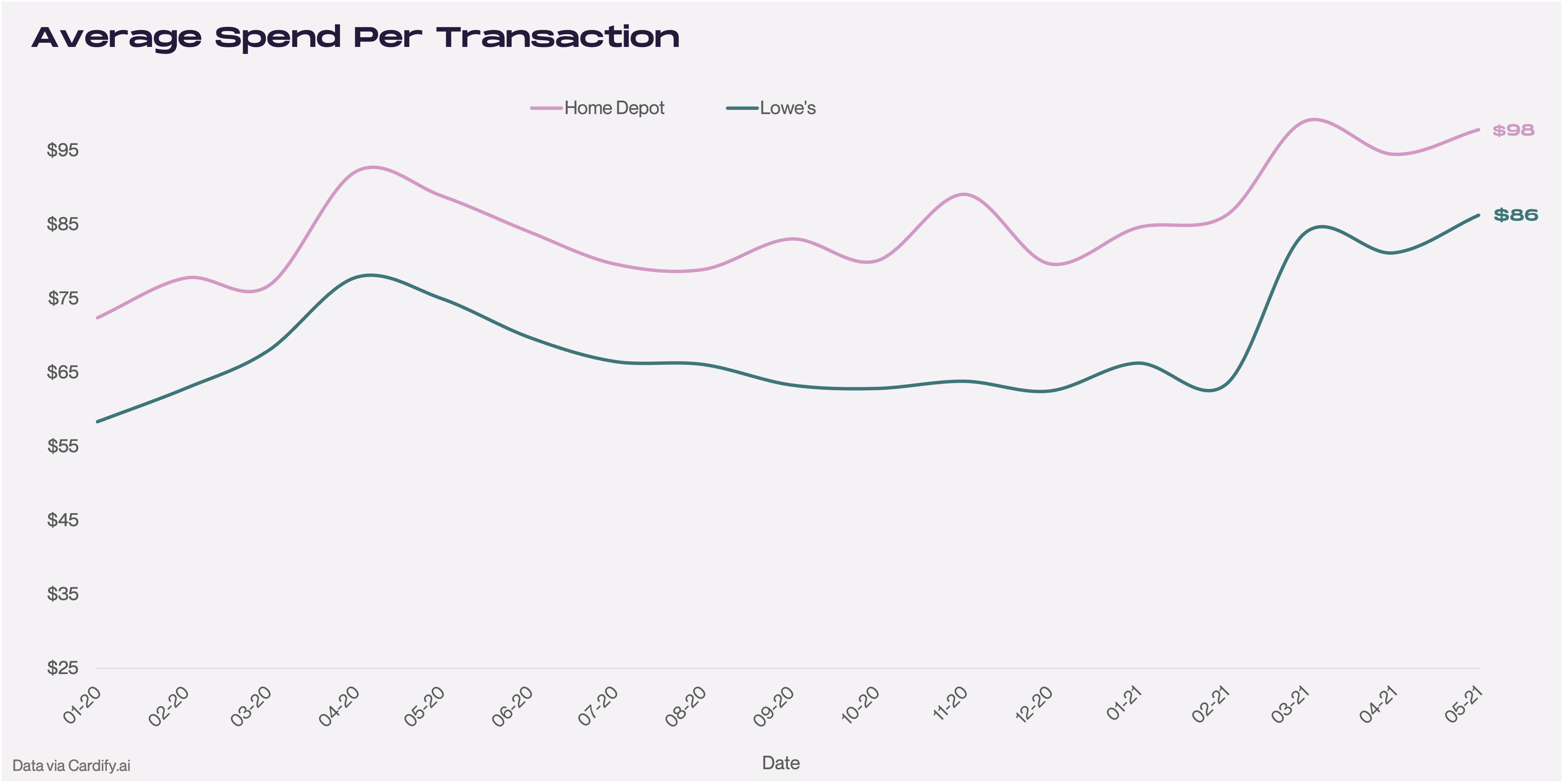 Lowe’s gained significant market share from Home Depot during the early days of the pandemic - jumping from 23% to a peak of 27% in May 2020. However, Home Depot steadily won that market share back and then some, with Home Depot owning 81% market share, compared to only 19% for Lowe’s, in April 2021. 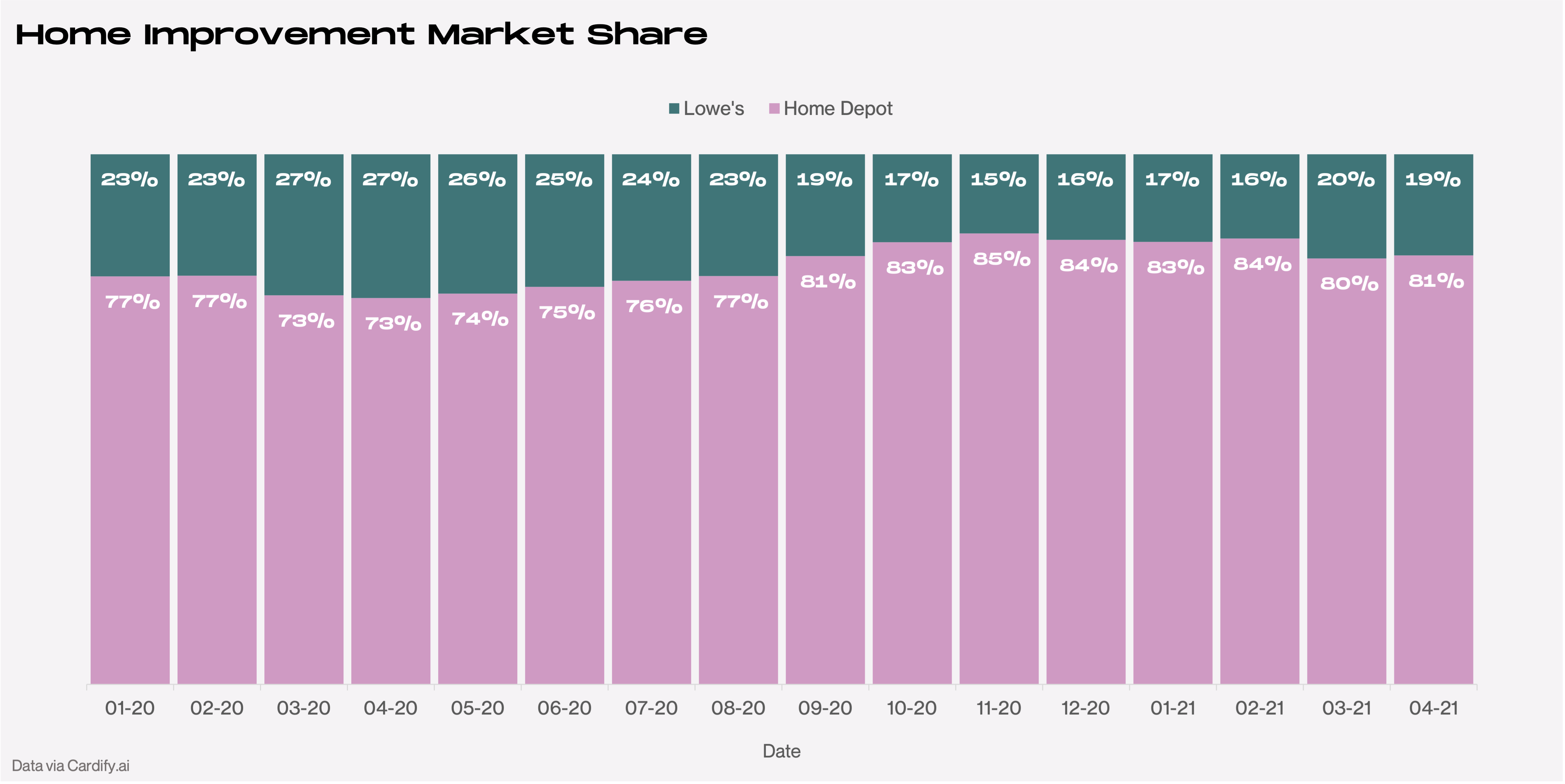 Cardify polled more than 900 verified Lowe’s and Home Depot customers, asking about spending habits and loyalty.
Of consumers who had home improvement or DIY plans, nearly half (44%) put their project on pause due to the changing (often increasing) cost of materials in the past three months. 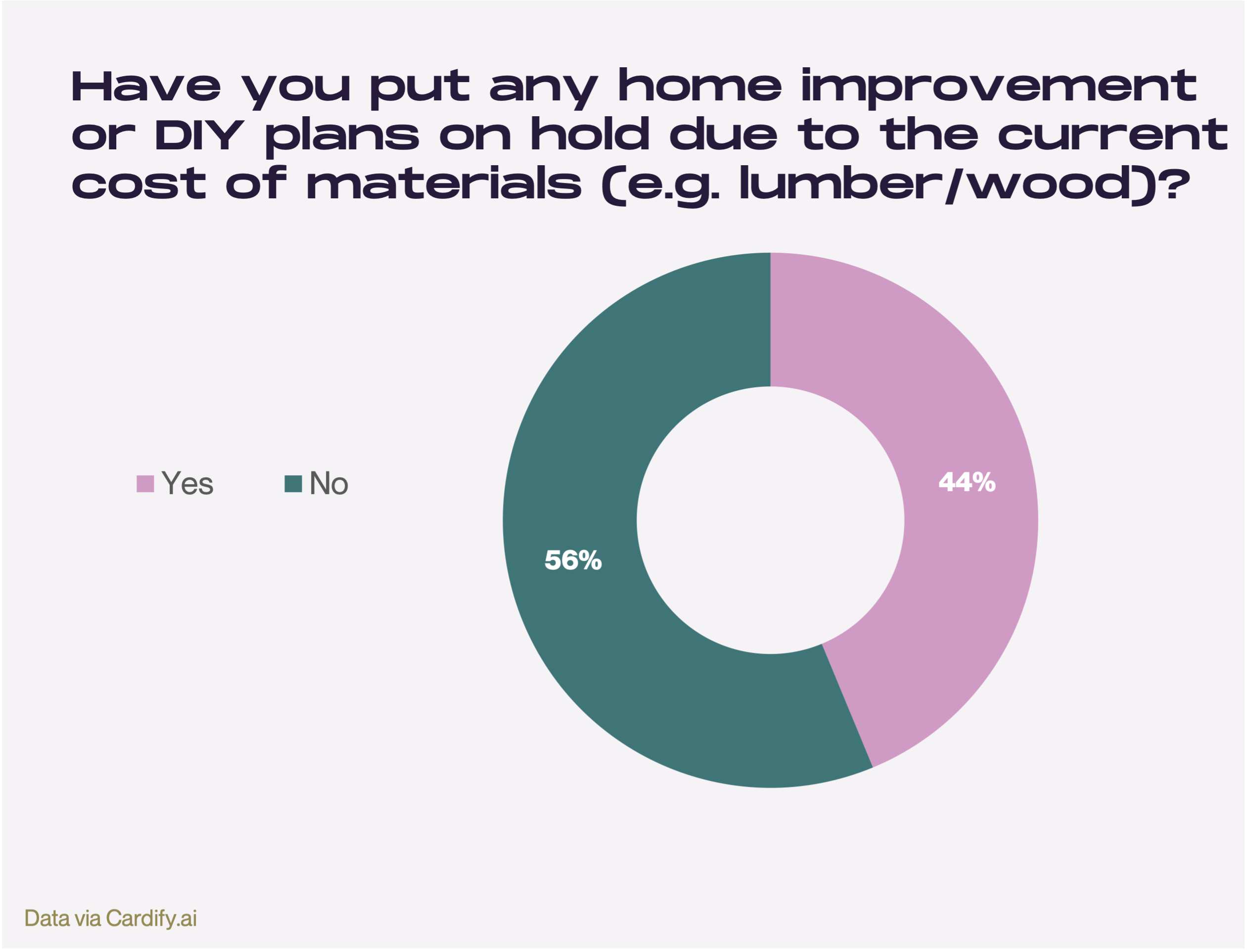 Home Depot commands more loyalty than Lowe’s: of Home Depot shoppers, 52% consider it their preferred store. Of Lowe’s shoppers, 44% said it is their preferred store. In the survey, both store loyalists cited location, prices, and product selection as their top three reasons, but at differing rates. Home Depot shoppers are nearly twice as likely to cite location (61%) as Lowe’s shoppers (32%), while Lowe’s wins on prices by a very small margin (41% vs. 40%).
‍
Respondents also wrote in reasons for loyalty, often naming political and ethical reasons - especially amongst those who prefer Lowe’s, where respondents often cited the company’s $25 million donation to support minority-owned businesses during the COVID-19 pandemic. 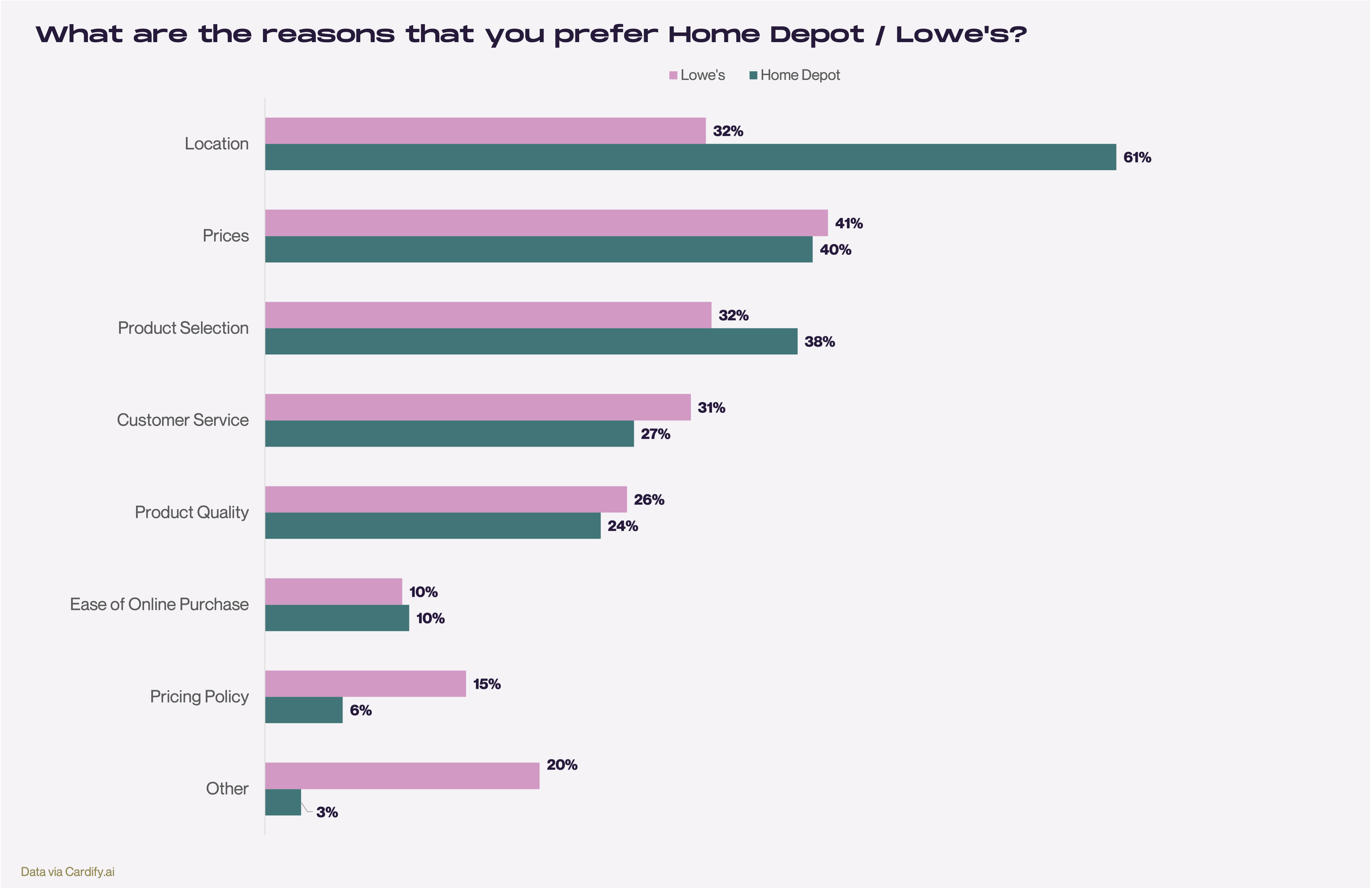 Both home improvement giants saw success during the pandemic as the whole category was buoyed by lockdowns. It remains to be seen how they will perform in a post-pandemic world, where revenge travel and entertainment spending are likely to be primary focuses.