Trendsetters of the 21st century: How women are driving the economic engine

1. Women are increasingly contributing to economic activity, both in terms of investments and current spend
2. This year, deposits across top trading platforms from women investors soared 318%,  and disruptors like Robinhood are capturing a large % of that growth
3. While women may be newer to investing, they still face a persistent wage gap when compared to men, which may be mitigated as businesses increasingly recognize the importance of women spending power to their sustained success

The future of the global economy depends upon equal representation and participation of women. In recent years, women have made significant strides in combating some of the underlying causes of the persistent gender gap; in the United States, for example, women now represent a majority of college students, and hold the majority of jobs in the American workforce.

And while women may drive consumer trends, fads in the financial markets are not always immediately captured by women. Indeed, when examining user trends and investor attitudes toward cryptocurrency and Reddit-driven positions, women seem less eager than men to jump aboard the bandwagon. That said, women are quickly closing the gap when it comes to making investments, joining platforms and driving large upticks in deposits. Moreover, women are outpacing men when it comes to spend across categories, suggesting that the women force is truly the backbone of the economy.

Unfortunately, despite their contributions to the financial engine, women continue to face a pronounced wage gap when compared to men.

“Our data shows women are increasingly taking control of their financial futures and considering new strategies,” said Esther Park, General Manager of Cardify.ai. “Still, our data reflects an ongoing need for both engagement with the marketplace and equality in the workplace as society takes strides toward equality.”

To better understand how women today respond to and influence market trends, Cardify examined differences in investment patterns, exposure to new trends like cryptocurrency, payment patterns, and finally, income between women and men.

Women investors are growing in numbers -- in every sense:

When compared to 2020, deposits in 2021 across popular platforms (TD Ameritrade, Fidelity, Robinhood, and Vanguard) from women investors have grown by 318%. In the same time period, deposits from male investors also spiked, but by a more modest 234%. But while new money is flooding into trading platforms, disruptors are succeeding at taking away market share from legacy players in the space. 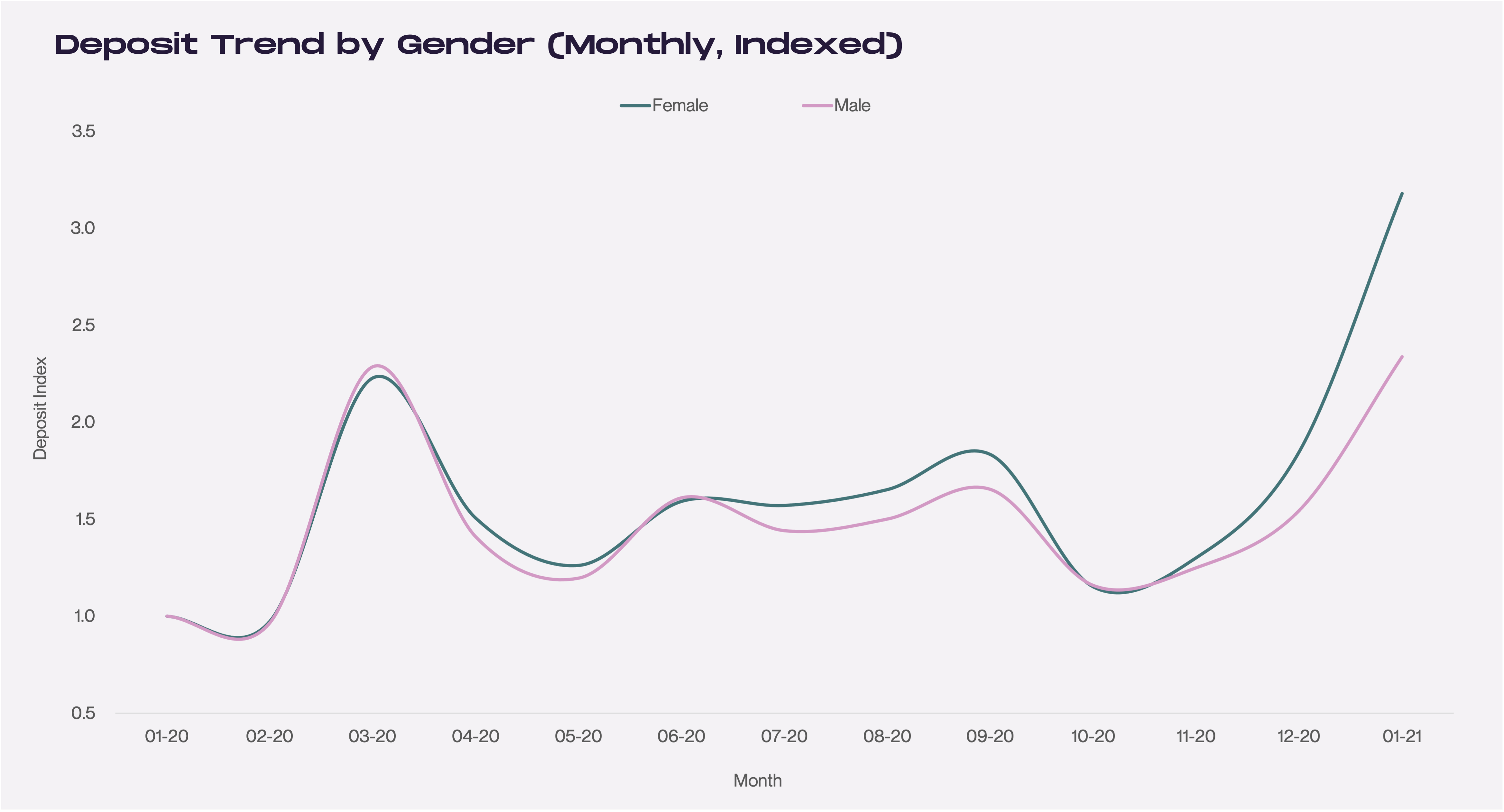 While men still outpace women in terms of total representation of deposits across investment platforms, the share of deposits from women investors rose from 19.3% in 2020 to 24.5% in 2021. 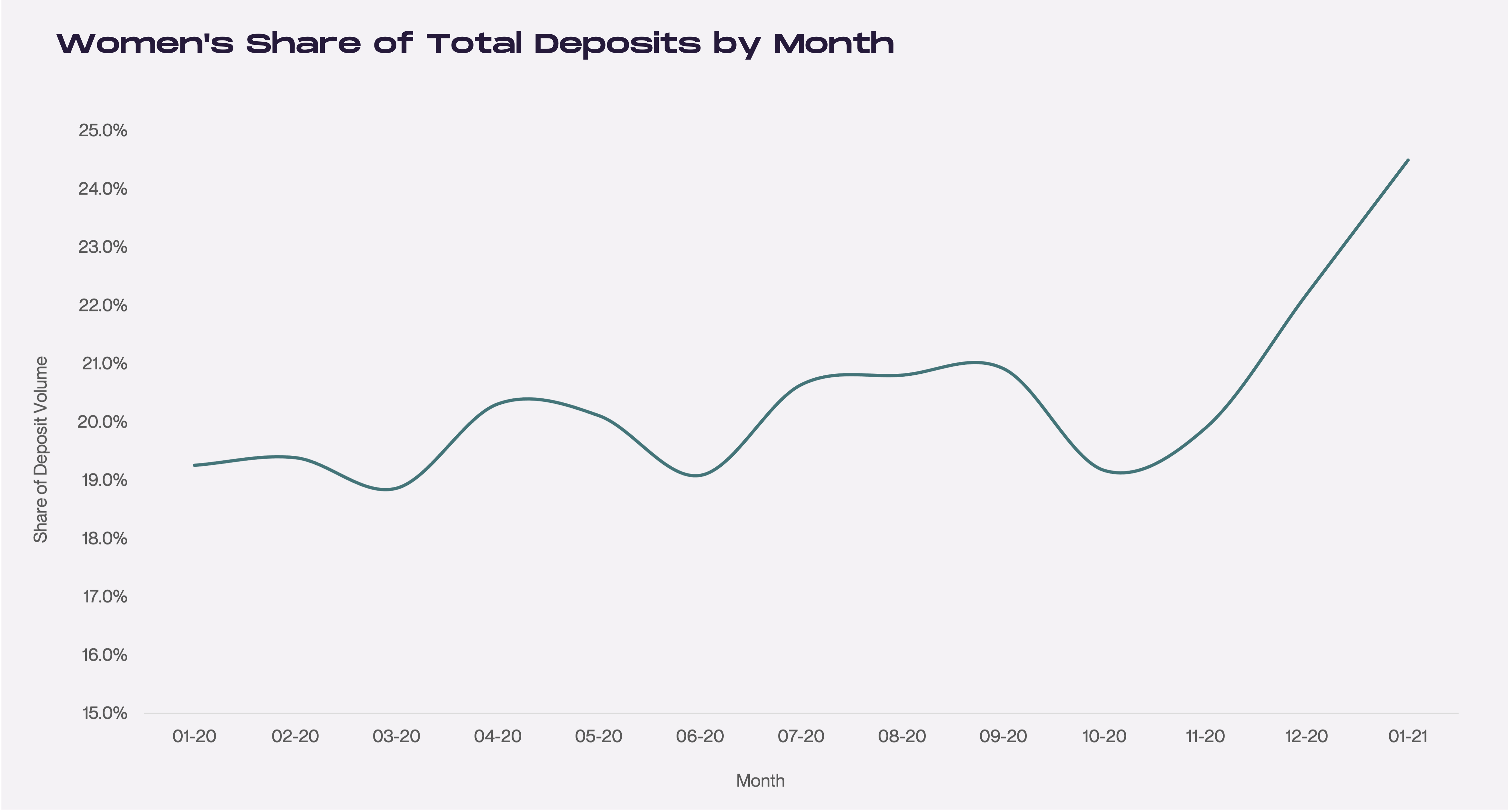 Much of this growth has been driven in the last few months; since late 2020, the proportion of new women investors has jumped, reaching a high of nearly 60% in late November of last year. 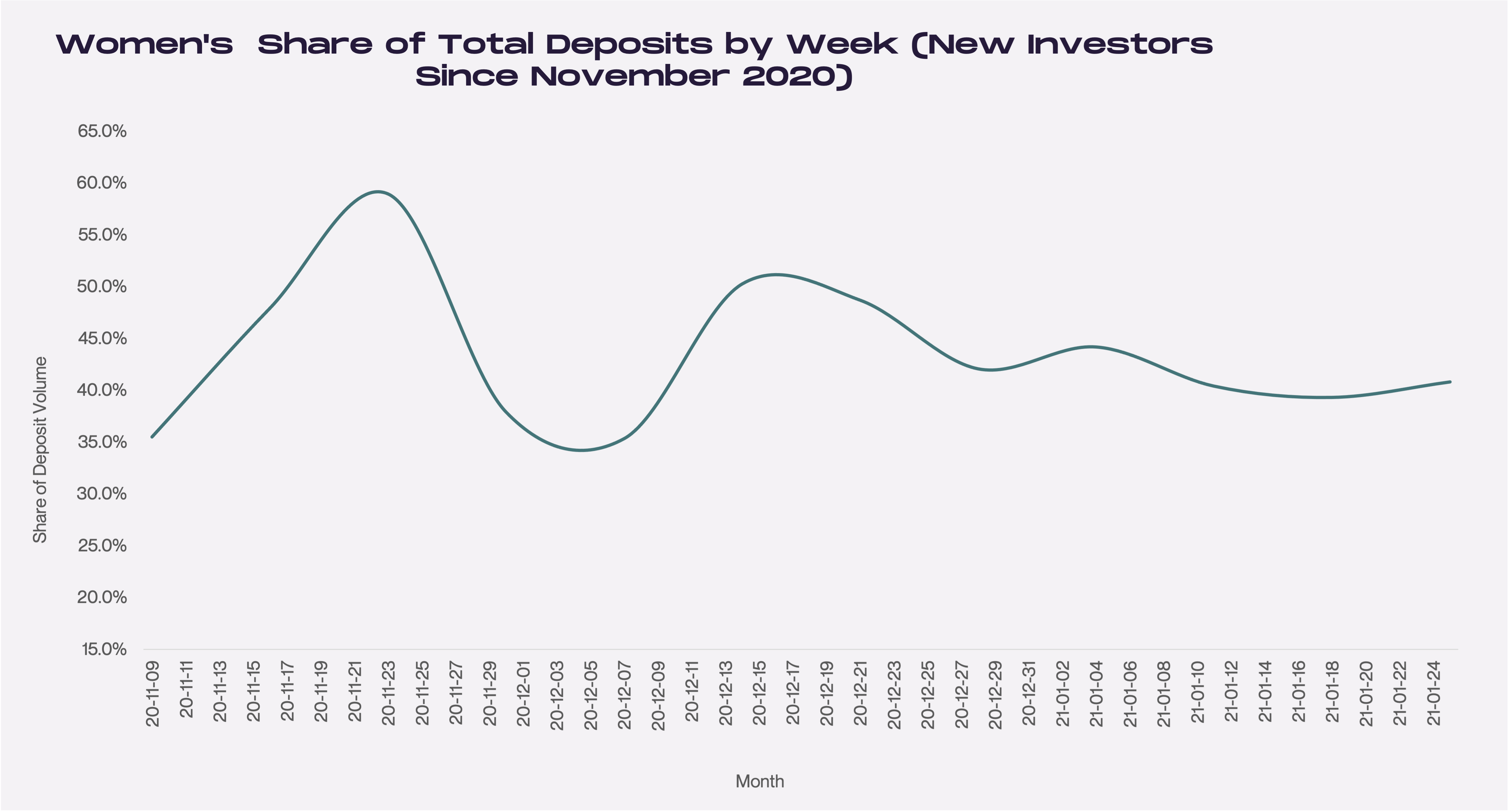 It is not only the share of deposits that is seeing major growth among women; indeed, user numbers are also trending upward thanks to women users. Robinhood, in particular, has enjoyed significant patronage from women; women user numbers have grown 209% from 2019 to 2020, compared to a 90.6% increase in men users (men still outnumber women on the platform). Women similarly beat out men in user growth at Fidelity and at Vanguard, where the proportion of men actually decreased between 2019 and 2020. In fact, of the four investment platforms analyzed, only TD Ameritrade saw a larger increase in the proportion of men versus women users, but even this margin was slight, at just under 5 points in difference between the genders. 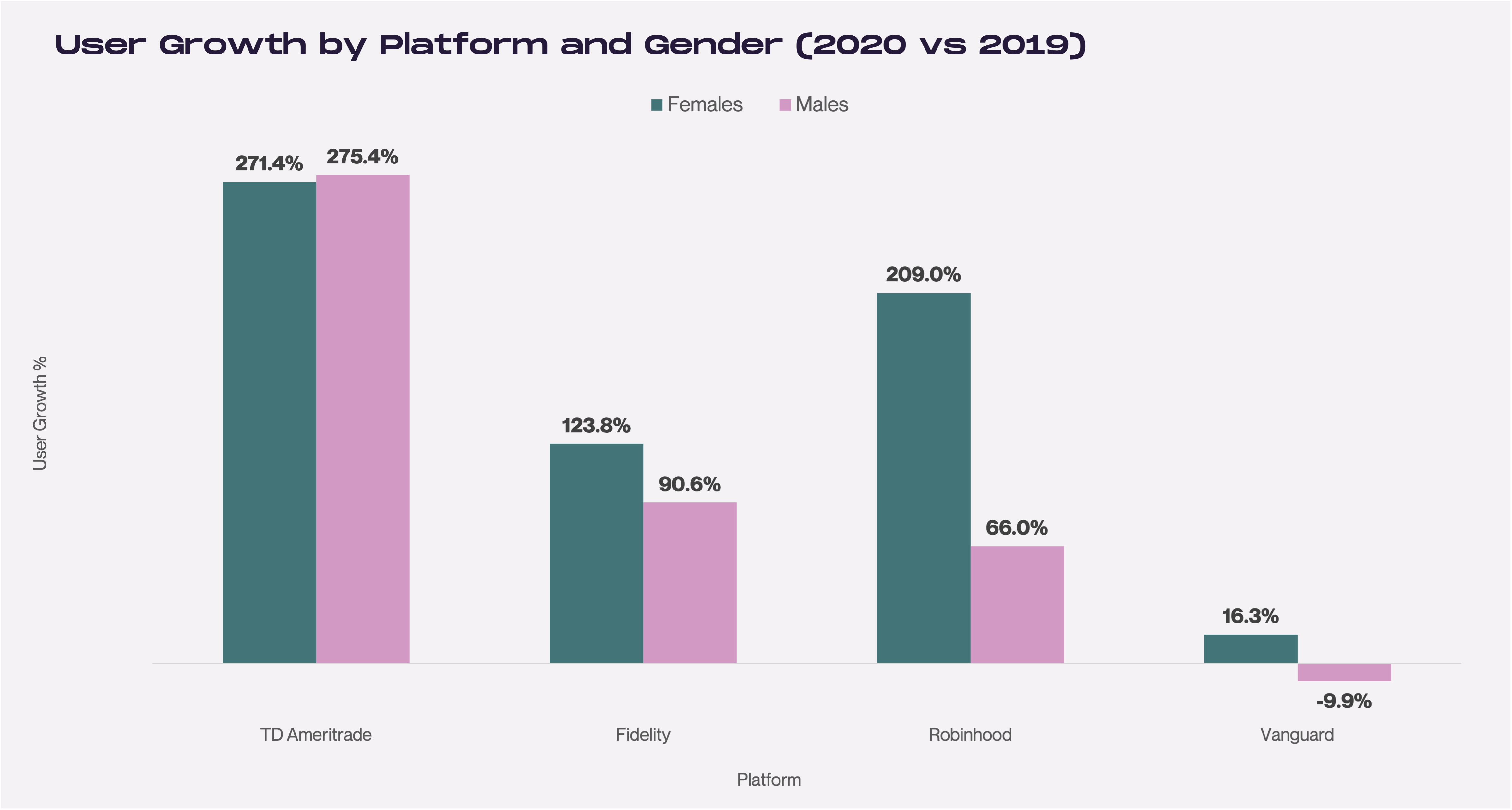 This growth in women user base has continued into 2021, with Robinhood seeing the biggest leap, and today, more than 40% of Vanguard’s user base is comprised of women. 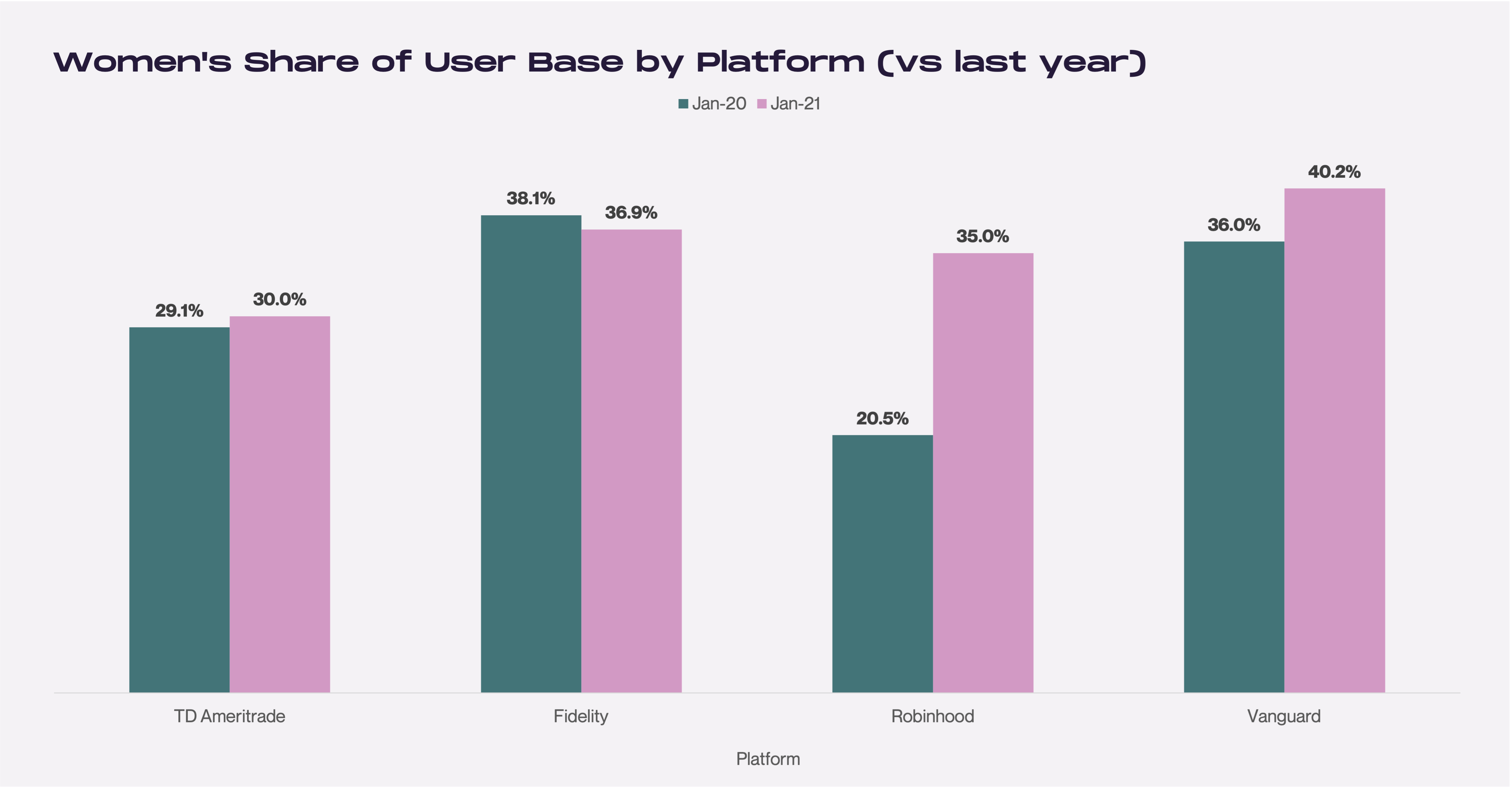 Despite the growth, an information gap certainly persists among genders when it comes to investing; for example, when surveying retail investors over 30% of women say they were not at all aware of the AMC and Gamestop trading frenzy in early 2021. Only 17% of men say they had no idea of the trend. 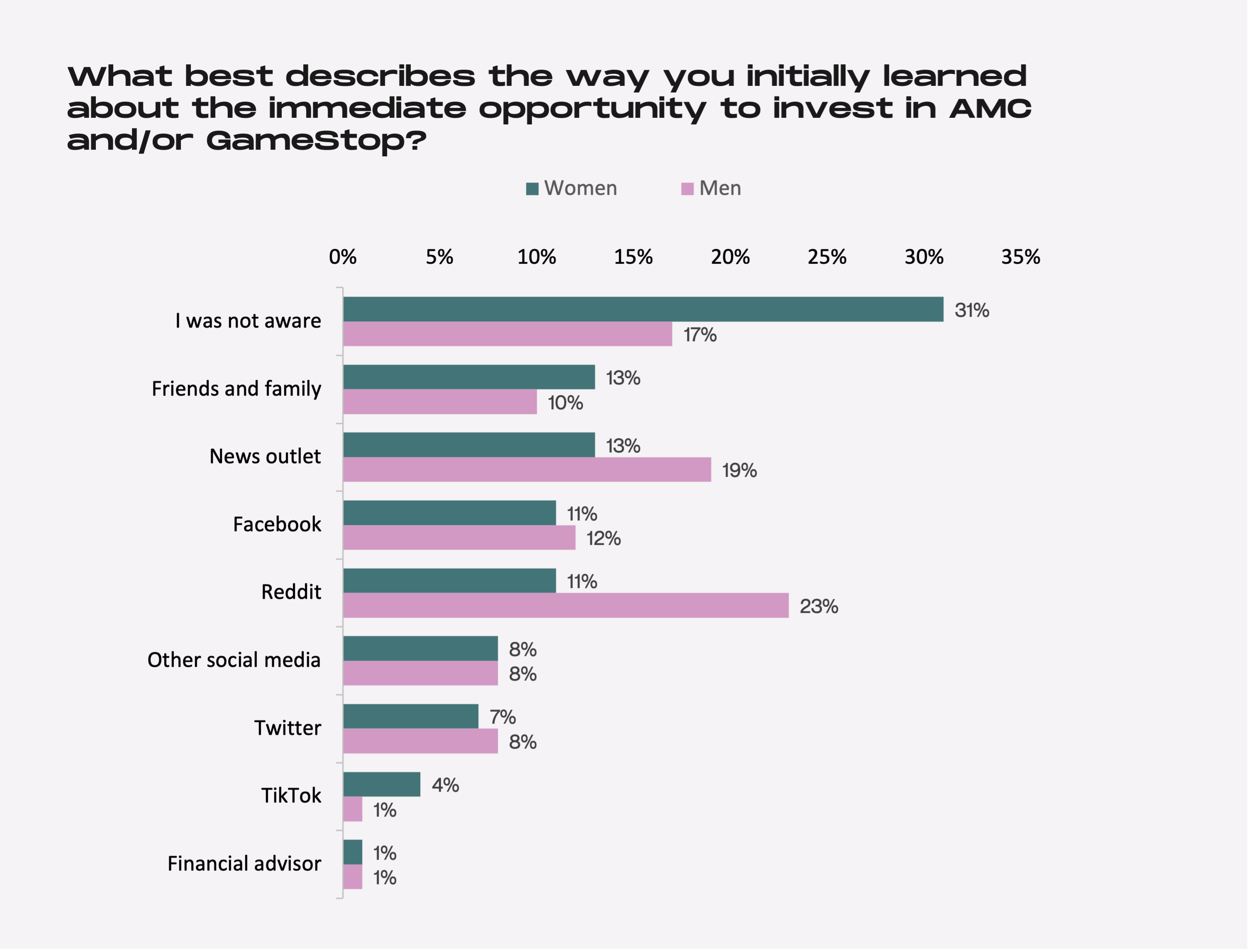 Women are also more likely to have had a bad experience on an investing platform -- 15% of women investors say their experiences have been negative enough to result in a complete trading stoppage (compared to 7% of men). This is despite the finding that men were twice as likely to have held an AMC or Gamestop position in the last four weeks, and over 50% more likely to have lost money on these positions.

Cryptocurrency is a new frontier for women, who say more education is key:

Women are newer to crypto investing than men -- 26% of women surveyed said they made their first cryptocurrency investment in the last six months, compared to 16% of men. However, as with investing overall, deposits in cryptocurrency from women investors have soared, coinciding with bitcoin’s rising price. Men, on the other hand, have seen much more modest increases in deposit trends. 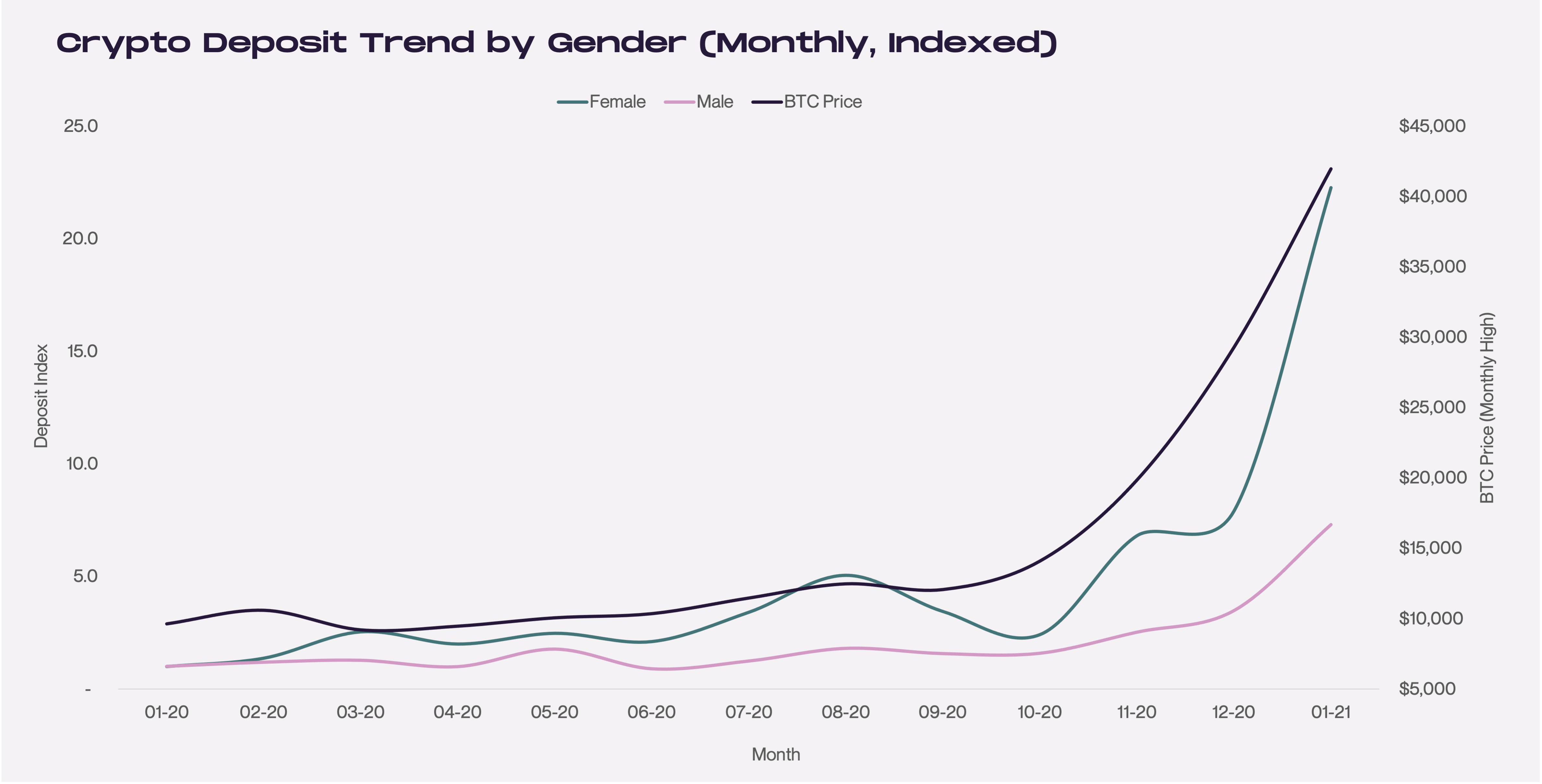 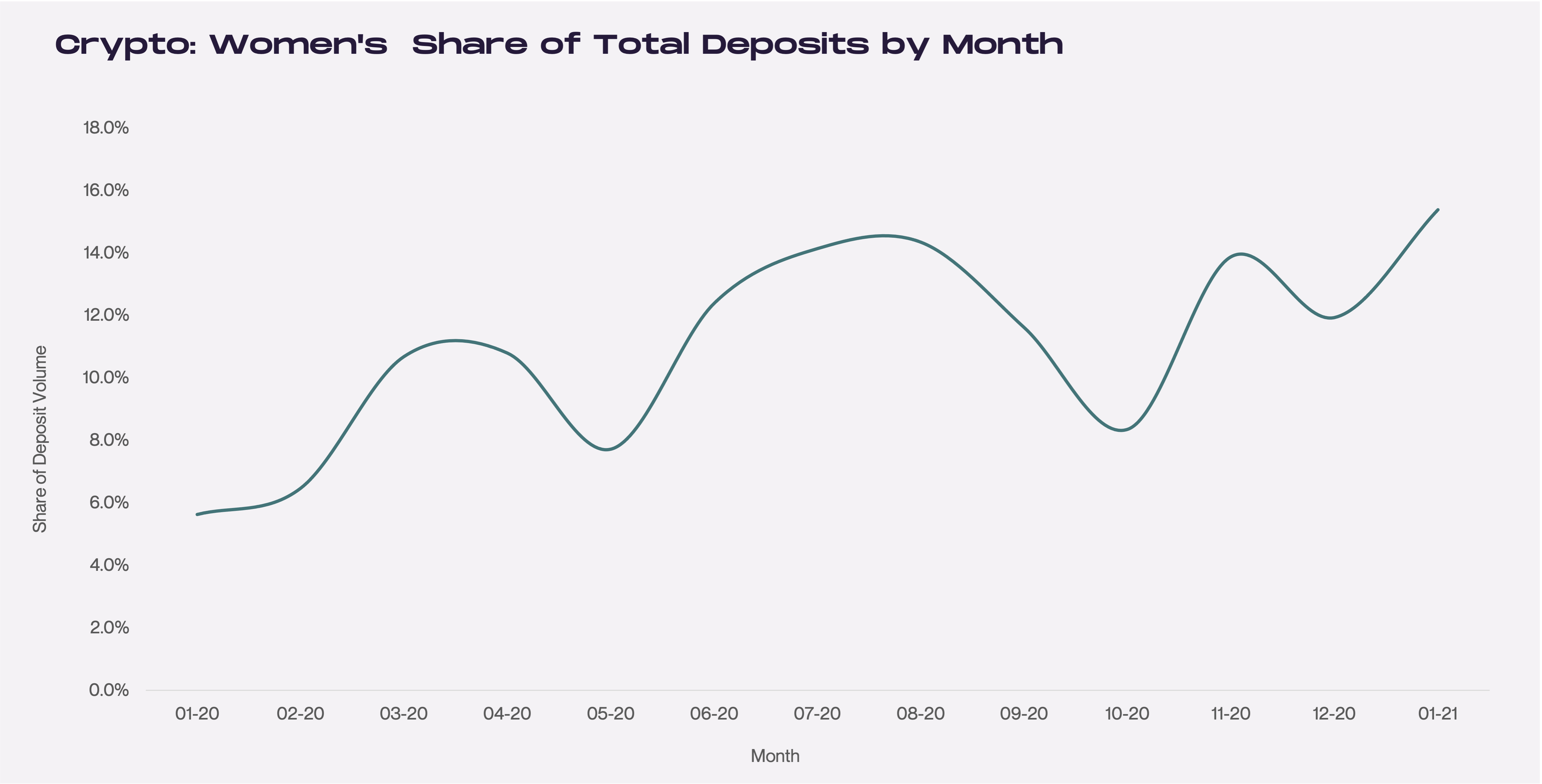 Women are making cryptocurrencies a bigger part of their portfolio: a year ago, it made it less than 2% of total investments, whereas today, that proportion stands at over 11%. This represents an increase of over 500%. 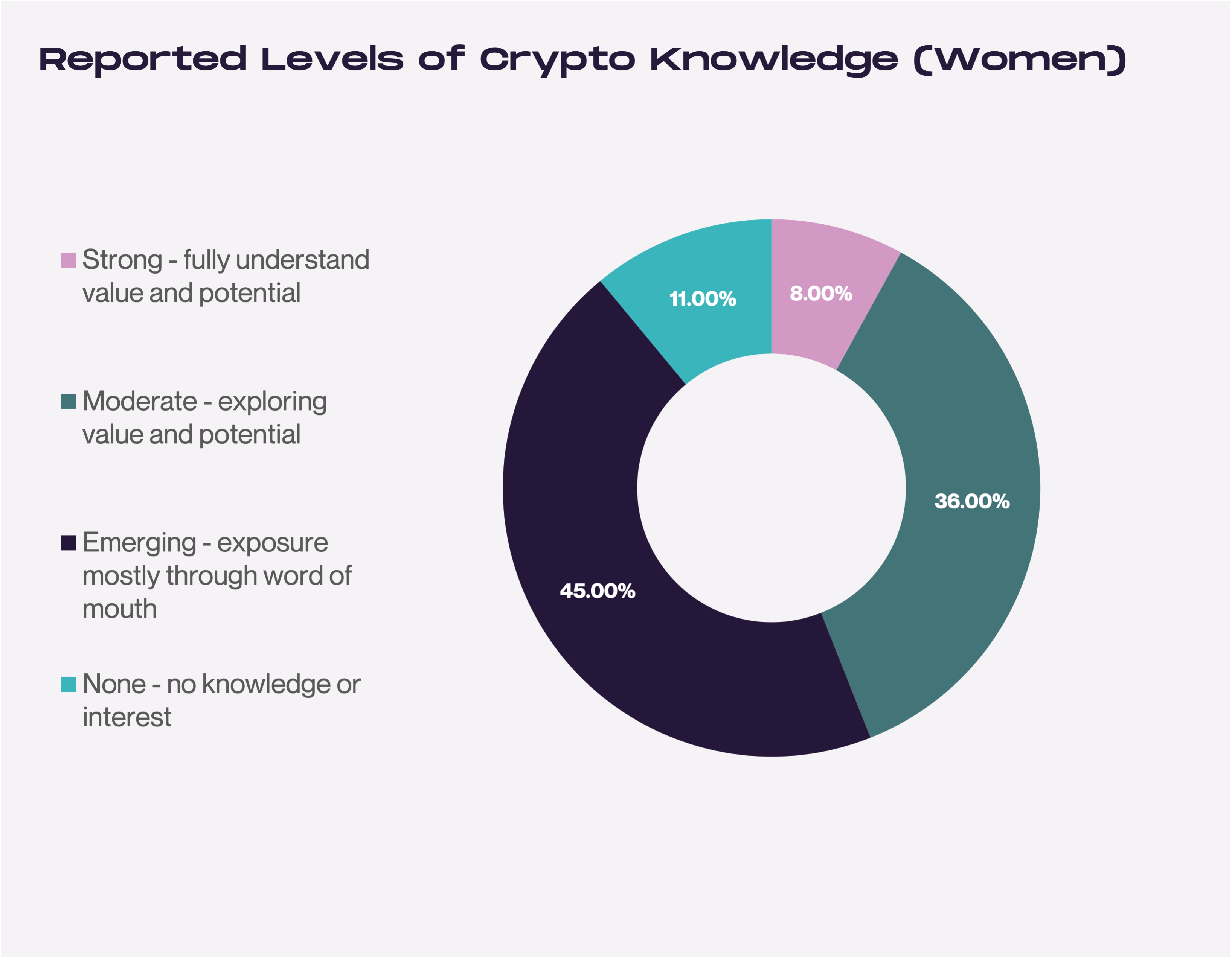 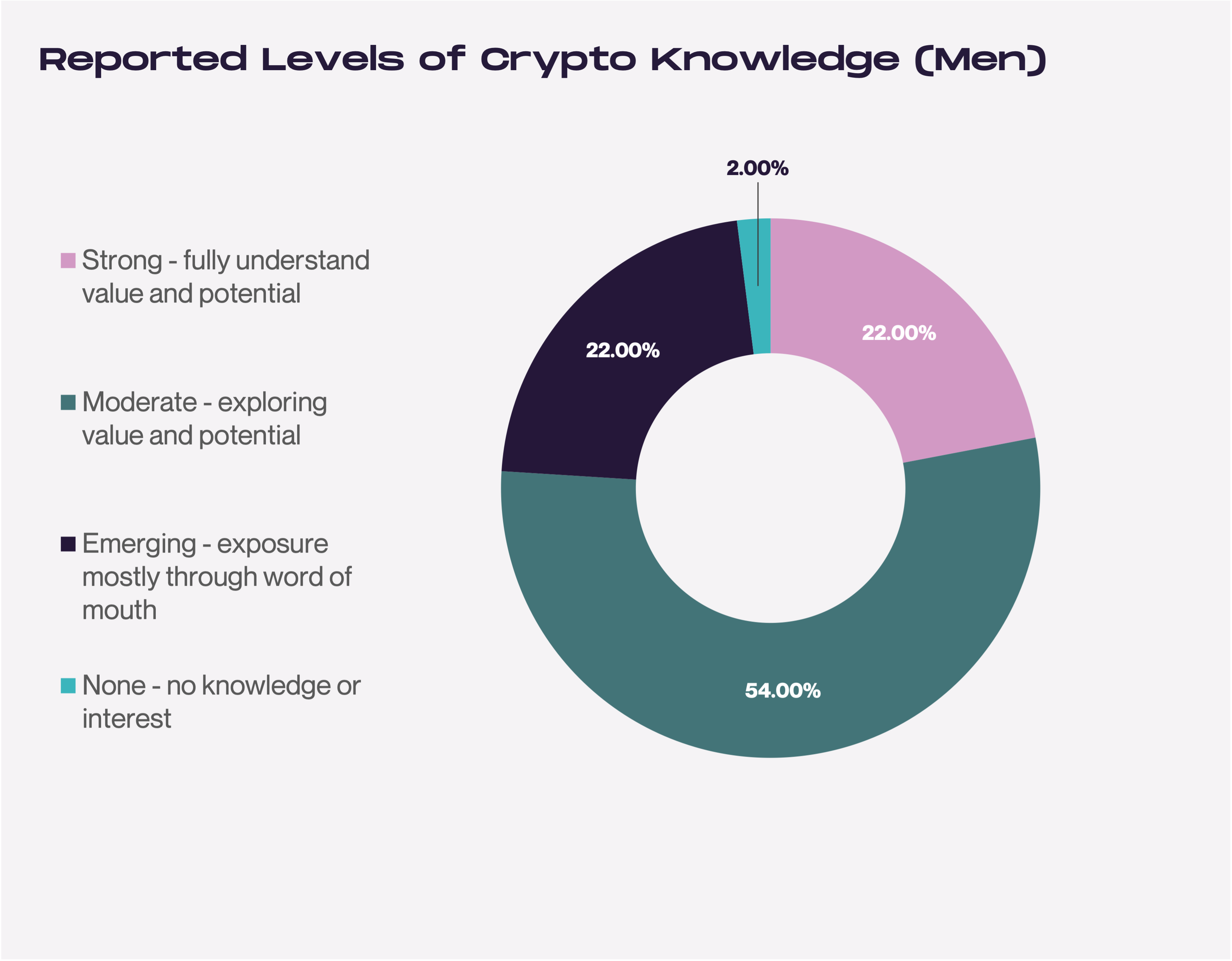 Relatedly, while 23% of women say that more education and information would increase their faith in the integrity of the cryptocurrency market, only 9% of men share this sentiment. 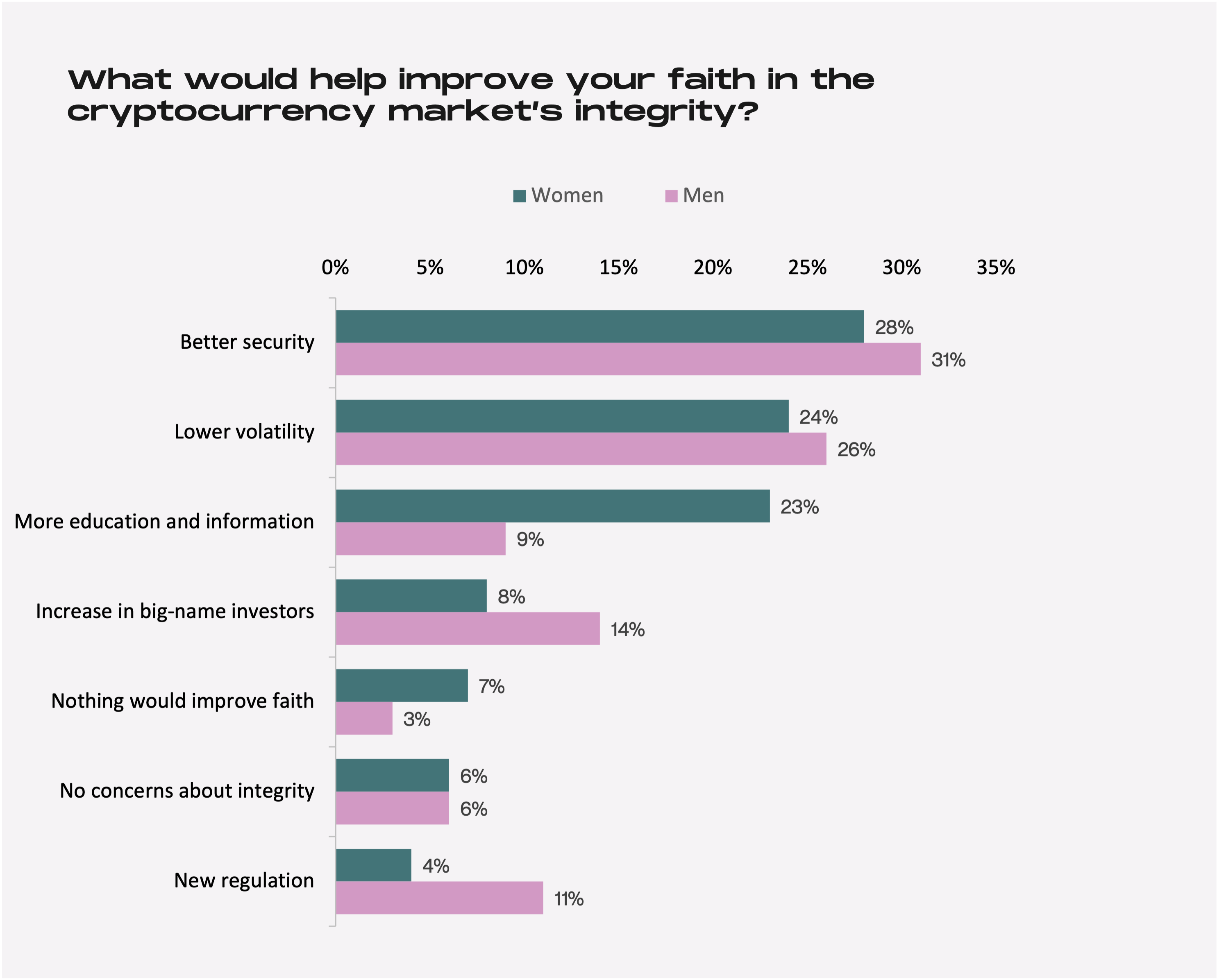 Men as a whole seem to have more faith in the longevity of the market, with 35% of male respondents adopting a HODL approach and noting that they will keep their cryptocurrency for longer than five years. This squares with the finding that men are more interested than women in investing in cryptocurrency to diversify their portfolio. 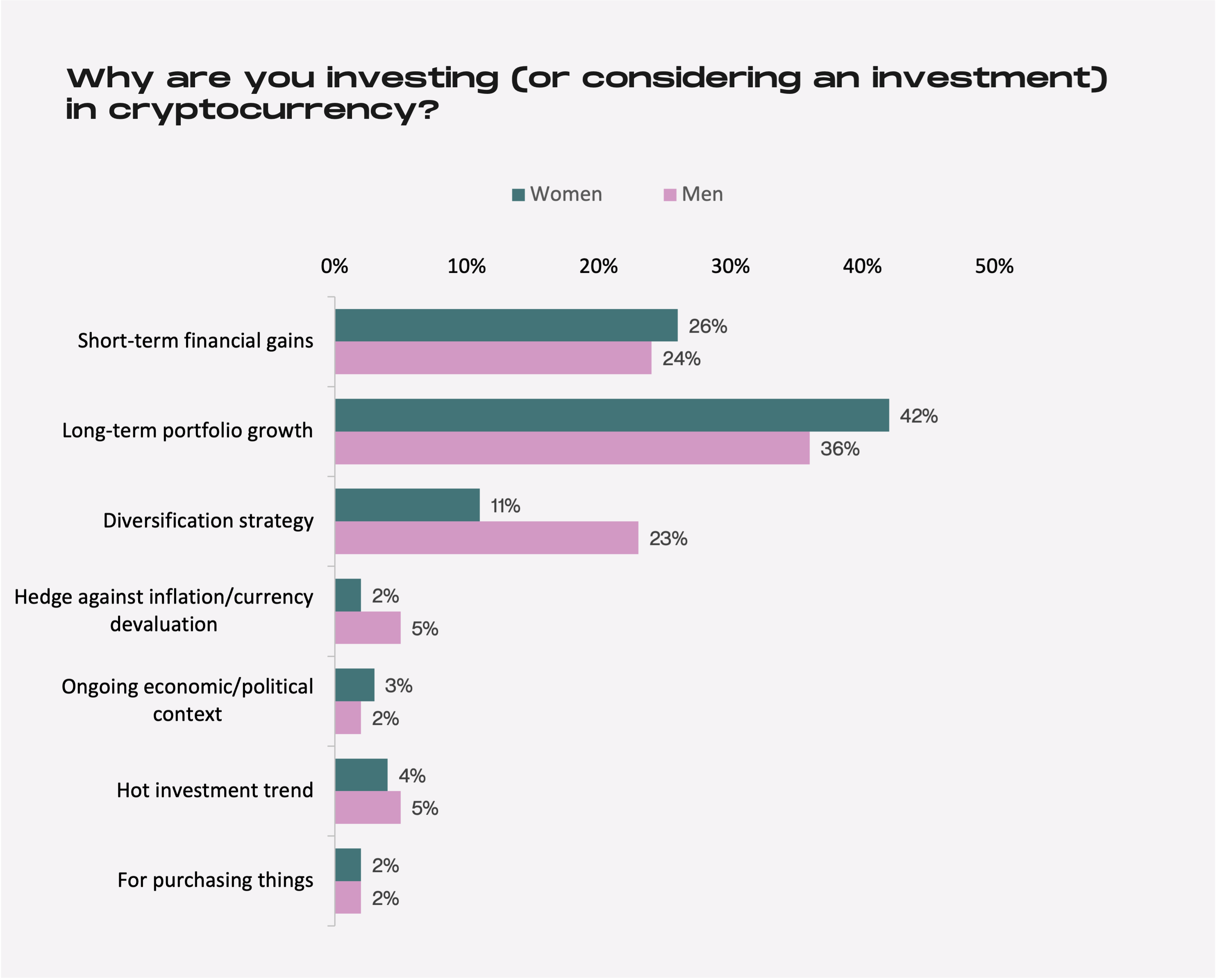 A plurality of both women and men have 4+ payment cards/ products at 41% and 48%, respectively. When it comes to share of wallet, women and men are remarkably similar -- while men spend marginally more of their paychecks on restaurants, computers, and electronics, women outspend their male counterparts on other retail outlets, including grocery stores, warehouses and wholesale stores, and clothing and accessory purveyors. 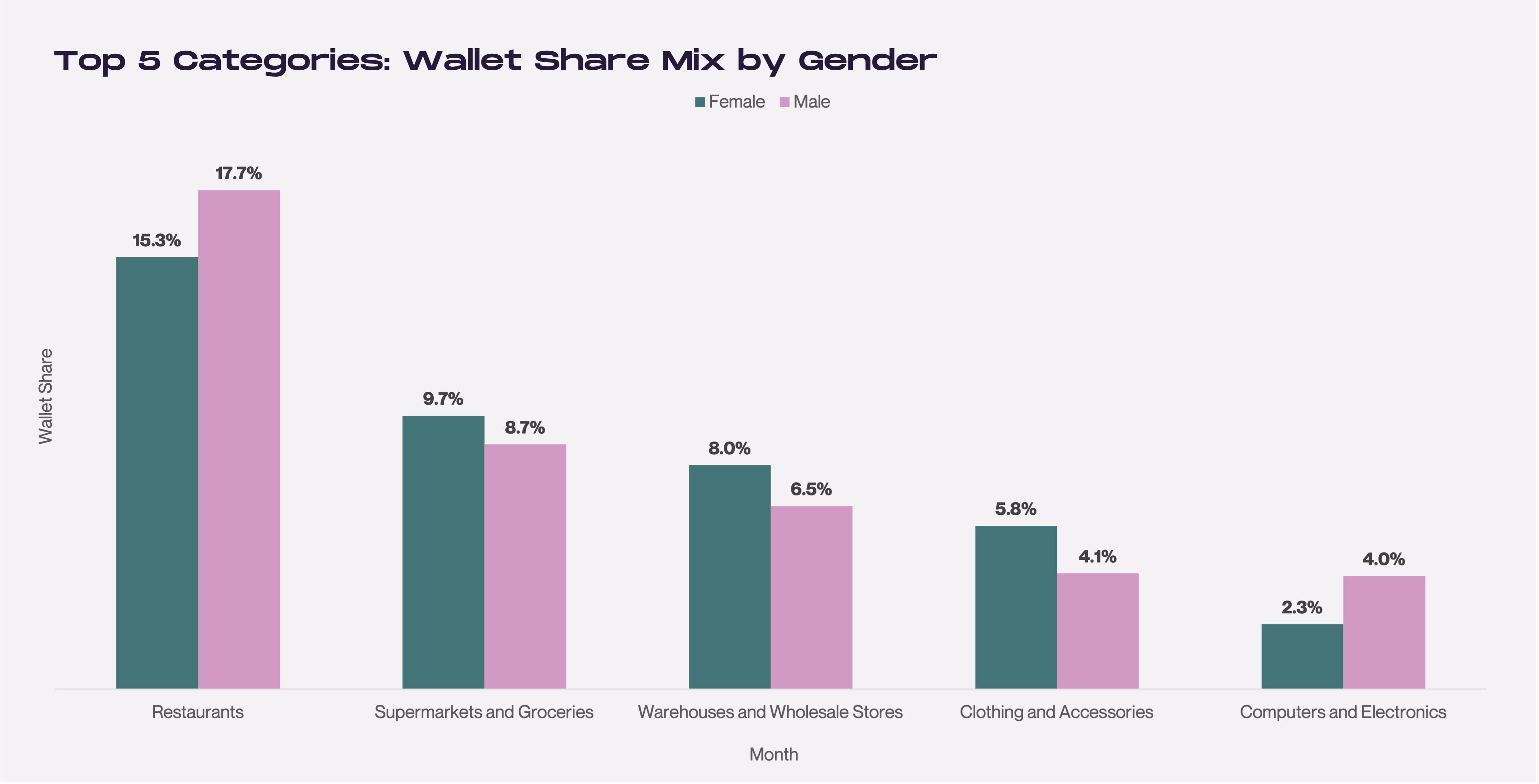 As evidenced by the above findings, women are increasingly deploying capital across a number of vehicles, both emerging and traditional. But in an age-old and tired narrative, the income gap between men and women persisted throughout 2020. While women start their careers making marginally more than men (in the 18 to 25 age category, women have an average salary of $43,416 versus an average salary of $42,898 for men), this is the only time in their lives that the average skews in favor of women workers. 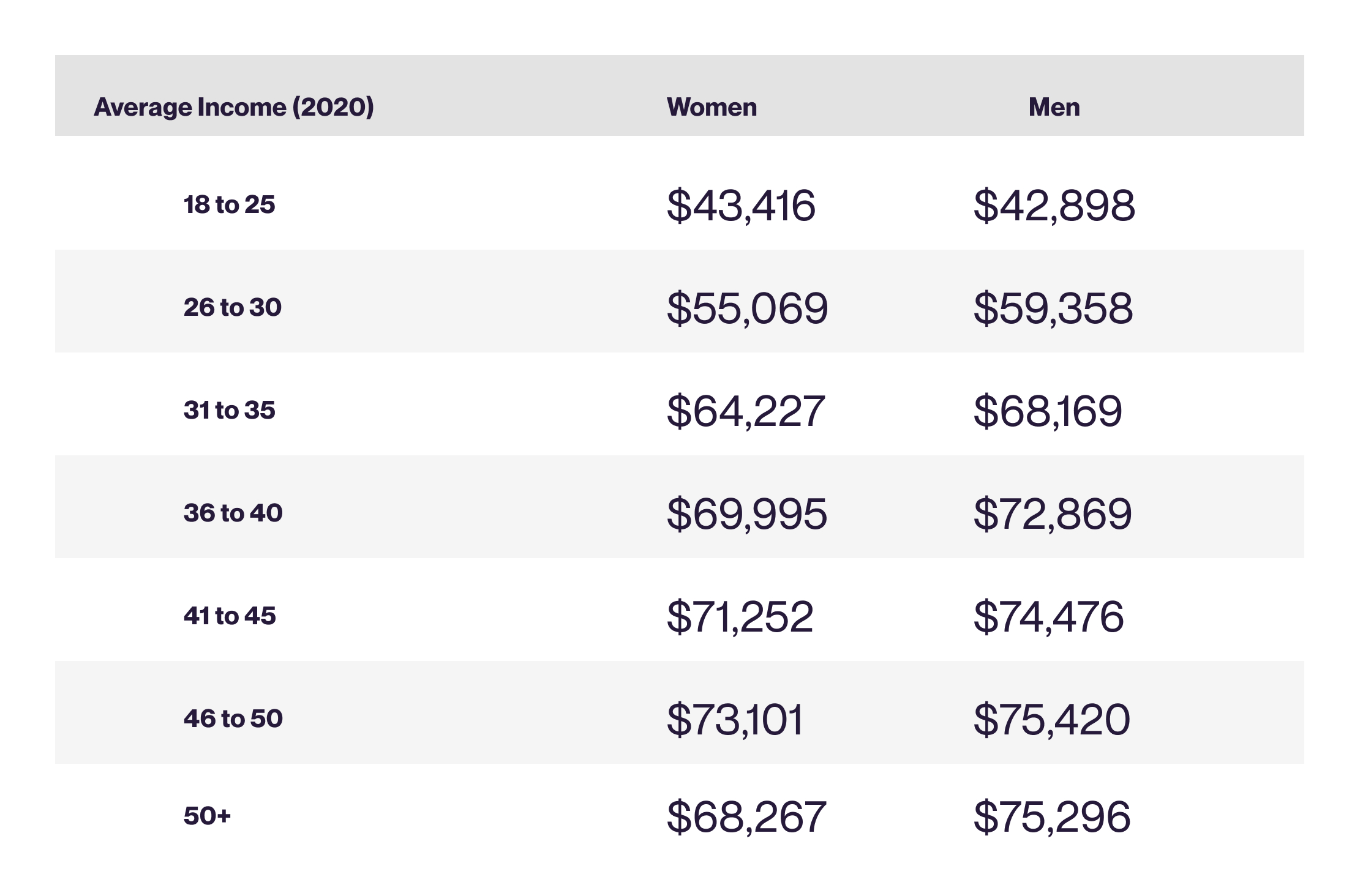 For those between 26 and 30, the average man receives a salary that is 8% higher than the average woman. By the time workers are over 50 years old, the wage gap is most pronounced -- the average income among women in 2020 was $68,267 -- compare this to the average income among men of $75,296. Assuming a retirement age of 65, this means that women will make, on average, nearly $200,000 less than their male counterparts.
‍
While women are plainly becoming increasingly vital economic engines, participating in increasing numbers in financial activity, the wage gap remains a persistent problem. But perhaps as businesses continue to recognize the importance of women to their long-term success (and women continue their mounting achievements), this gap will soon disappear.