The Battle For Streaming Dominance: A Netflix Deep Dive

1. While spending is higher in 2020 than 2019 and churn is low, Netflix lagged in customer acquisition, ending 2020 at nearly half the acquisition levels it started the year with.
2. Netflix maintains an industry-leading churn rate of less than 5%. By contrast, CBS All Access hovers around 15%.
3. Of those who prefer Netflix, people cited new content being added frequently (19%), exclusive content on the platform (26%), and a large content library (41%) as the biggest reasons why.

Our previous report outlined the overall streaming market, and the impact COVID-19 had on the category. With Netflix’s recent earnings report, Cardify delved deeper into the streaming giant to understand market share, spending, customer acquisition, and customer churn data. While spending is higher in 2020 than in 2019 and churn is low, Netflix seems to be losing the customer acquisition and market share game as other streaming players come into the space. Further, we surveyed streaming service subscribers to understand their perspectives on price sensitivity, exclusive content, and the things people value about streaming services.
‍
Netflix was the undisputed streaming leader in September 2019, with 58% market share to Hulu’s 36%. Then came the December 2019 launch of Disney Plus, which knocked Netflix down to 48% market share. As of December 2020, Netflix still owned 45% of the market, with Hulu falling down to 28%, Disney Plus holding largely steady at 17%, and HBO Max quintupling its market share from 1% to 5%.

While other streaming platforms took some of Netflix’s lunch, spending on the platform was both higher and more in 2020 than it was in 2019. 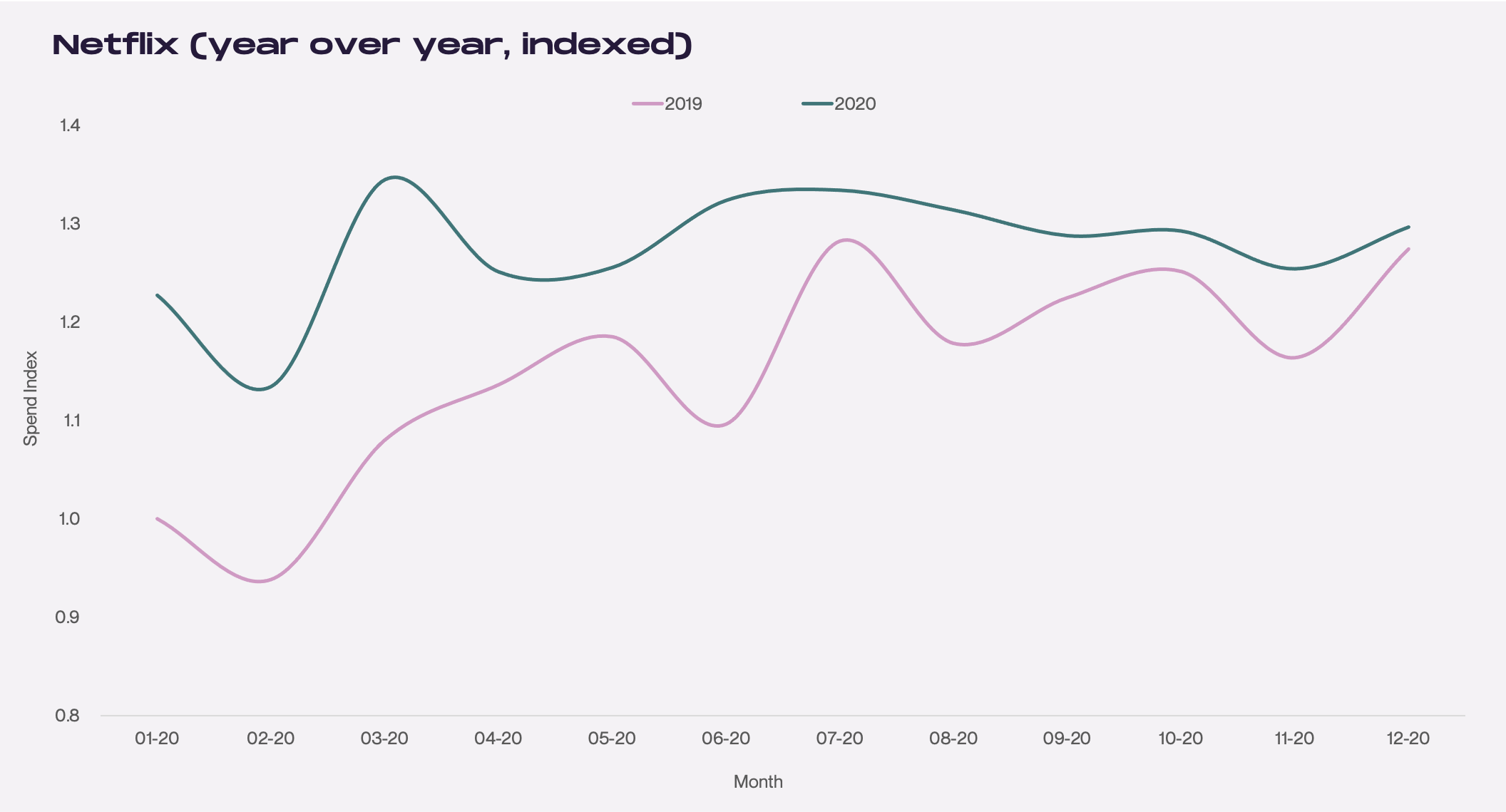 Further, Netflix has an industry-leading churn rate of less than 5%. By contrast, CBS All Access hovers around 15%. However, every streaming service saw churn spikes in late January and early February 2020, something to watch for again in 2021. 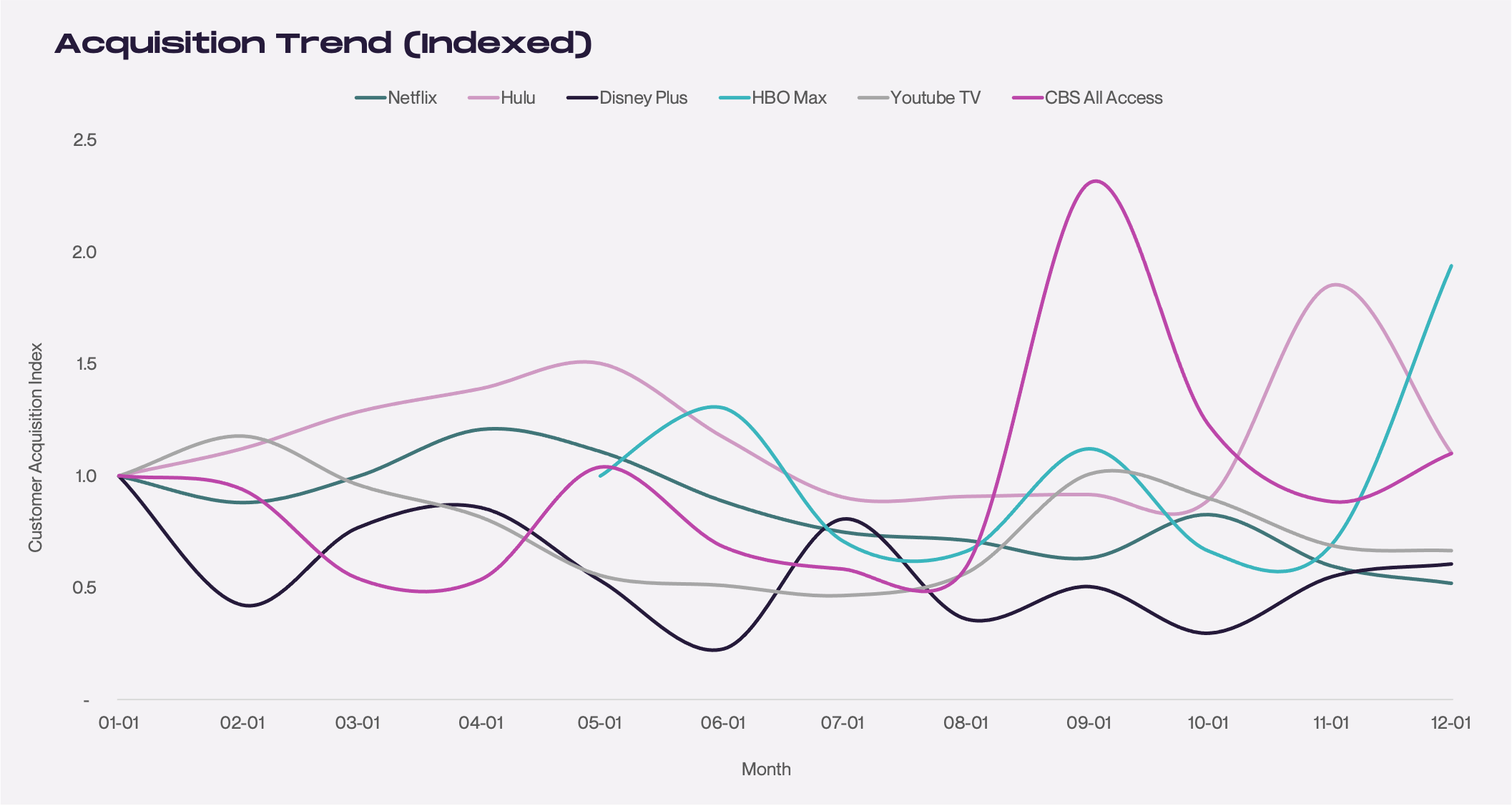 To learn more about user intentions, Cardify surveyed streaming service subscribers about their feelings towards streaming platforms as a category. A strong majority (64%) say Netflix is their top choice. By contrast, Hulu came in second with only 17% of respondents saying it was their top choice platform.

When asked the reasons behind their top choice selection, people cited new content being added frequently (19%), exclusive content on the platform (26%), and a large content library (41%) as the biggest reasons why.

Another win for Netflix is that people the vast majority (90%) of people subscribe to two or more platforms, suggesting Netflix could maintain its low churn rate even as other platforms gain subscribers. That said, 31% of people said they are either somewhat likely (21%) or very likely (10%) to switch to a new streaming service in the next 12 months, highlighting how critical adding new content and keeping a large library will be to all streaming providers.

The other thing to note is that 95% of people say price is very (67%) or somewhat (28%) important to their subscription decisions. Given that Netflix has raised prices multiple times over the years and there’s no indication they will stop raising prices incrementally in the future, there’s risk for the platform to hit a price ceiling, after which they could experience significant churn.

Netflix arguably built the streaming category from scratch and was its dominant player for years. Now it faces a vastly different landscape, both in terms of customer wants and what the market has to offer. While most people tend to keep their Netflix subscriptions once they have them, it remains to be seen if that trend will continue as more platforms begin to invest not only in original content but maintaining a catalog of nostalgia-inducing shows like The Office or Downton Abbey.