1. The US streaming market has been experiencing declining growth rates for over six months.
2. Disney Plus quickly captured 14% of share upon launch.
3. While new subscriptions spiked as a result of the pandemic, most of the increase was from previously churned customers.
4. Consumers are increasing their spend as they pay for higher plans and subscribe to multiple services for additional content.

2019 was a fairly quiet year for the US streaming market, up until the arrival of Disney Plus. The entertainment giant jumped onto the scene with much fanfare and did not disappoint, capturing 14% of the US market within its first three months.

Note: Each company’s market share is calculated as a percentage of total subscriptions in the US.

Aside from that, however, the streaming market had begun to plateau with customer acquisition and churn being relatively flat and most providers beginning to see declining growth rates in the US.

Disney Plus indexed against launch

Then the pandemic struck. With everyone cooped up at home, and with fewer forms of entertainment at their disposal, streaming traffic quickly hit all time highs. But does the increase in streaming translate to more money - are streaming providers seeing a revenue boost, or just extra server costs?

Our analysis shows that paid subscriptions did in fact increase sharply throughout March, with most streaming providers doubling or tripling their monthly customer acquisition numbers. CBS All Access, was the only anomaly, remaining fairly flat through March.

This spike was fairly evenly distributed across all age groups, with 35+ year olds edging out younger demographics by a slight margin.

Now, spring is a tricky time for dissecting the streaming market, as there’s always a spike in subscriptions with school closures for spring break. However, a quick look back at previous years shows that this year’s growth rate is well above the cyclical nature of the market. In 2020, there was a 119% increase in new subscriptions in March. In 2019, that number was 72%. That’s a big jump.

Given that the US streaming market is fairly mature, the magnitude of the increase took us by surprise. So we did a bit more digging and found that the vast majority of the March subscriptions came from previously churned customers, with Disney Plus being the sole provider bucking the trend, due to the recency of its launch.

This is not an unusual phenomenon in the streaming market. Consumers have long shown that they will take providers up on the promise of their pay-as-you-go model and switch the service on and off based on their immediate needs and the availability of new content. However, it does show that the US streaming market is beginning to hit saturation, particularly among younger demographics that were earlier adopters.

Aside from customer acquisition, there was also a notable increase in consumers' total spend. All streaming services saw an increase of 5-8% in the average monthly spend of their subscribers. 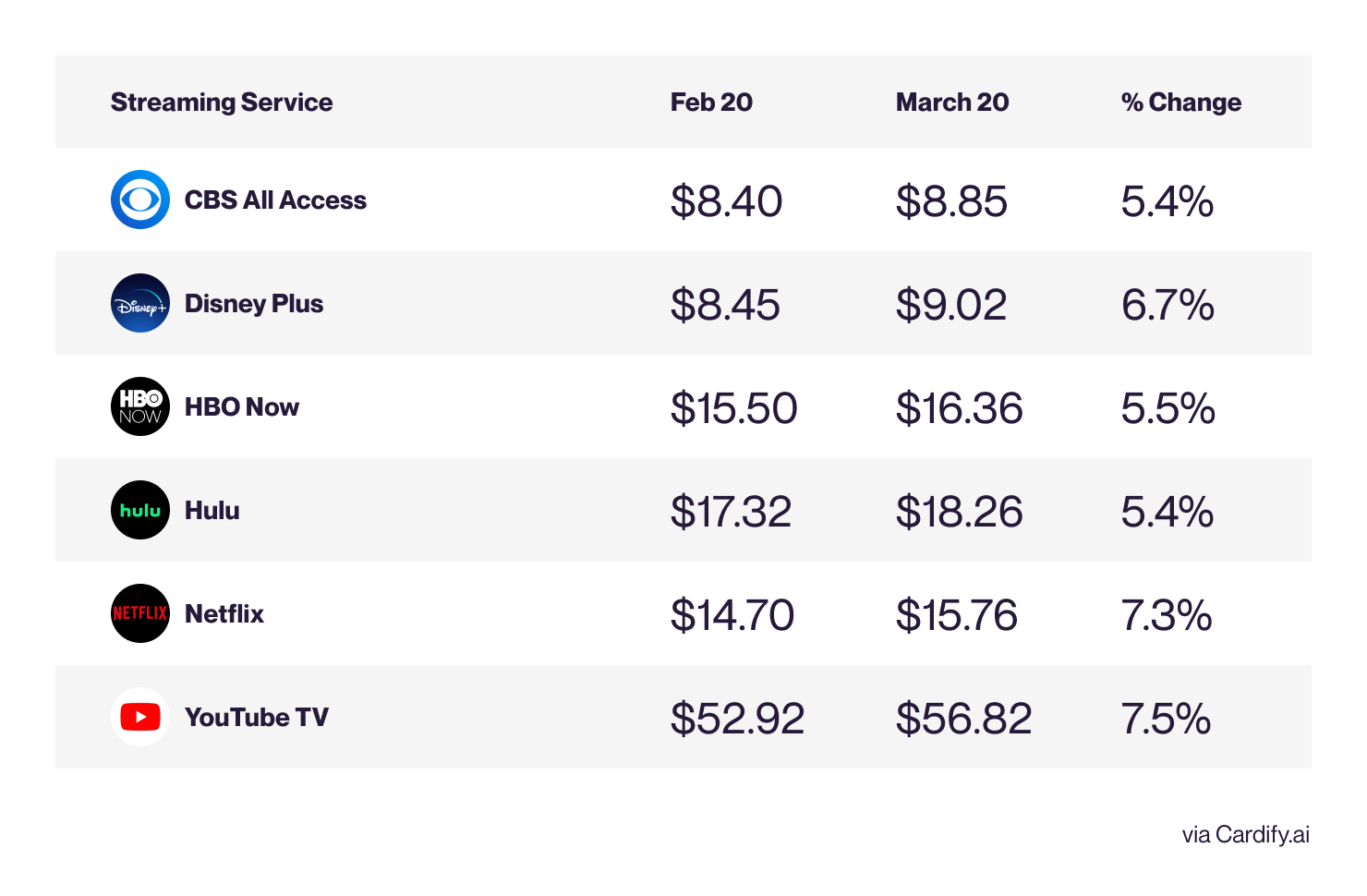 The result of this is a sharp increase in total spend per household, as consumers are increasingly comfortable spending more for quality content.

It's worth noting that most streaming providers offer a free trial period. So the effects of the pandemic are likely understated in this story and will begin to show themselves throughout April. We expect to update this story in the coming weeks as we get a clearer view of the current month.